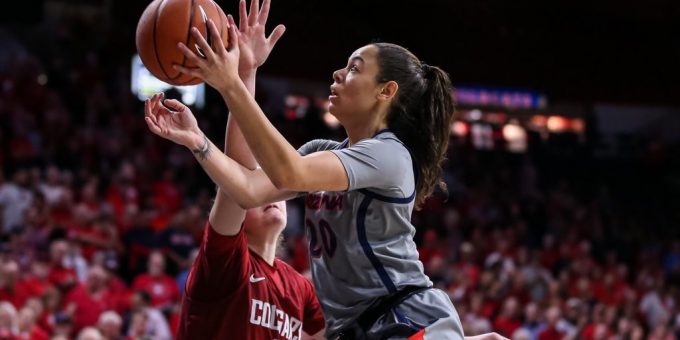 BEDFORD – Nobody would have blamed Dominique McBryde for some moments of self-pity, for feeling cursed as her basketball plans were disrupted by forces outside of her control.

The conclusion of her senior season at Arizona? Prematurely halted. Her chance to compete for a roster spot with the WNBA’s Los Angles Sparks? Cancelled. Those life circumstances might pale in comparison to the daily struggles of others caught in the grip of the coronavirus epidemic, but for McBryde, they were major setbacks.

Rather than pout, she remained stout. She has been rewarded for her commitment. Her basketball hunger will now take her to Hungary.

McBryde, one of the stars of Bedford North Lawrence’s back-to-back Class 4A state championship teams, has signed a two-year contract with VBW CEKK Cegled of the Hungarian Women’s Basketball League. She is set to report in early September.

For those unfamiliar with women’s professional basketball in Eastern Europe, McBryde’s new opportunity is remarkable. Cegled competes in the EuroCup, a high-level, elite league that features several WNBA players. It’s rare for a rookie to receive a contract, when only two Americans are permitted on the roster of each team.

”I’m thrilled and excited,” McBryde said. “I was scared when my deal with the Sparks didn’t go through, when training camp got cancelled. I was hoping overseas would be my next shot. Finally, a team called.

“When everything was going on, that was definitely my thought, there was some ‘Why me?’ My senior year at Arizona, one of my best seasons, and all the problems. I was upset. But then I had to think to myself, everyone was going through something.”

McBryde averaged 6.9 points and 3.5 rebounds as a defensive stopper for the No.12 Wildcats in 2019-20. Their season was cut short when the NCAA announced the cancellation of the women’s tournament on March 12. She started 25 games (missing six with a right foot injury) and posted season highs of 19 points (against Oregon State) and 10 rebounds (against Stanford).

She was a force for the Stars, graduating with 1,672 career points and a school-record 229 blocked shots. She was named to the 2015 Indiana All-Star team. She started her college career at Purdue before transferring to Arizona.

McBryde signed the training camp deal with the Sparks in April. But when the WNBA cancelled training camps, McBryde became a free agent once again. While under a two-year contract with Cegled, McBryde can still use this experience to land another WNBA opportunity.

Now she will cross six times zones to continue her career.

Need a quick geography lesson? Cegled, population of approximately 40,000, is located near the Hungarian capital of Budapest. McBryde’s new team went 7-14 last season, including 3-3 in EuroCup games, under head coach Kostas Keramidas. When she reports, she will undergo a quarantine of seven days before starting practice sessions.

“I’m nervous,” McBryde said. “This will be a new adventure, somewhere I’ve never been before. It’s a whole different continent and country.

“That will help calm my nerves before playing basketball. I’m just trying to stay ready as best I can. It’s a different style of play, similar to what we saw in the PAC-12. The league is very high level.”