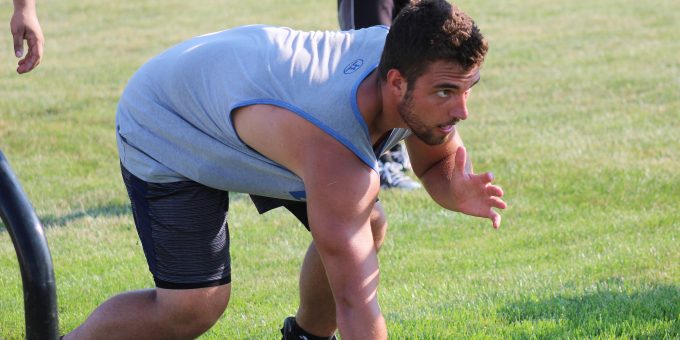 BEDFORD – Football is the epicenter as high school sports seek a proper path, through health and political minefields, back to normal. The game and its swirling cauldron of potential problems – large rosters, constant contact, huge crowds on a Friday night – will be viewed cautiously, even with extreme pessimism, in this virus time frame.

It’s like the scene from the film Apollo 13, as the engineers were looking for a way to guide the embattled crew back to the safety of Earth. “There are a thousand things that have to happen in order. We are on No.8.”

Yes, but that No.8 was a wonderful moment as the Stars gathered on the practice field to start the daunting process of making up for valuable lost time and preparing for a 2020 season that’s still on shaky ground. On this day, none of that mattered. Football was back. Sweating never felt so good.

Adhering to safety protocols mandated by the IHSAA’s and state government’s phased plan, BNL took the first steps. There’s so much to do, and so little time, between now and the scheduled opening game on Aug. 21. Will that happen? Nobody knows for sure. The only thing that mattered was what could be controlled between the lines. The Stars loved every minute.

“Oh man, I’ve been thinking about this the whole time it’s been going on,” senior James Underwood said. “It feels amazing. I don’t want practice to be over.”

And then he said aloud what every athlete worthy of their shoulder pads, all across the nation, is thinking: “I just want to play football.”

Football on Day 1 consisted of drills – minus pads and helmets, minus contact other than a brush against blocking pads or catching a football. Those would be cleaned and sanitized afterward. The coaching staff wore face masks. This was as normal as it could be, considering the circumstances.

After being idle since early March, after missing months of conditioning, weight lifting and learning sessions, nobody cared.

“It’s awesome,” BNL coach Steve Weber said. “Four months idle is bad. The wife starts making you paint porches and redo floors. I’d much rather do this. It felt good. I think the kids had a good time, the coaches enjoyed it. It was a good day.”

Reaching this point was no small feat. So many rules were established, more than just “6 feet” of social distancing or self-reporting possible symptoms. The coaches are the front lines.

“The thing that worries me the most is trying to uphold all the rules, all the regulations, and then do something wrong,” Weber said. “Nobody means to do anything wrong, but there are so many interpretations of everything. Most coaches are trying to do the right thing. That’s the thing that weighs on me – should I have done this or that?

“With the virus, I’m not nervous about it. It’s something that’s here and you have to deal with it. But you can’t sit and wait. We have to get things rolling and hope it works. If it doesn’t, at least we gave it a shot.”

BNL’s best shot will require some hyper-speed covering of lost ground. In the heat of the day, it didn’t take long to reveal who had spent the down time in leisure, who was unprepared for the physical toll.

“Football wise, Xs and Os, we’re not that much behind,” Weber said. “But as far as the level of conditioning and strength, it’s mind boggling how bad we are. And I don’t think we’re alone in that. You’ll find most kids didn’t do much. They’re used to having coaches on them – bam, bam, bam. If that’s not there, they play video games.

“I hope that doesn’t equate into more injuries.”

“There’s definitely a lot, we’ve fallen pretty far behind,” Underwood added. “We missed our whole spring, conditioning and practice. It will come down to who wants to work the hardest.”

For the next three weeks, the routine will be simple. Practice sessions for two days each week, followed by the annual option football camp in late July. Then it will be breath-holding time as schools prepare to open and full-contact practice is allowed. With so many athletes together, so many factors are in play.

”The hard thing is keeping kids apart, because they naturally want to gravitate to each other,” Weber said. “You can scream and holler, but it’s hard for them.

“In two weeks, we’ll get a good sense of how it will work.”