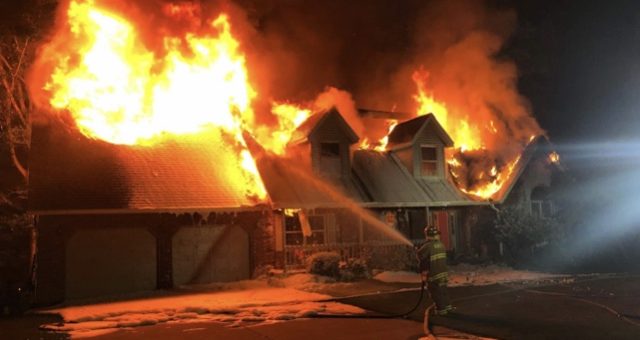 Firefighters from the Benton Township Fire Department arrived to find heavy smoke coming from the attic area of the home.

The fire grew in intensity and broke through the roof and fire conditions deteriorated rapidly. This forced firefighters to fight the blaze from outside of the home.

The roof eventually collapsed and the third alarm for the blaze was issued to bring additional water supplies and manpower to the scene.

Firefighters worked all through Saturday night into Sunday morning to extinguish the fire. The size of the home and the roof collapsing challenged those efforts.

The cause of the blaze is under investigation, and the home is considered a total loss.

IU Health Bloomington Ambulance Service assisted in helping hydrate firefighters as temperatures were high at the time of the fire.

No one was injured while battling the blaze.