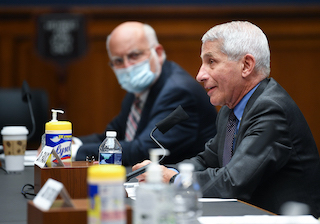 (WASHINGTON) – Coronavirus task force member Dr. Anthony Fauci issued a stark warning on Tuesday to lawmakers on Capitol Hill, telling them he wouldn’t be surprised if the US sees new cases of coronavirus rising to a level of 100,000 a day.

“We are now having 40-plus thousand new cases a day. I would not be surprised if we go up to 100,000 a day if this does not turn around and so I am very concerned,” Fauci told the Senate Health, Education, Labor and Pensions Committee during a hearing on the pandemic on Tuesday.

Fauci expressed dismay over people congregating in crowds and not wearing masks and inadequate attention being paid to guidelines on reopening.

“We’re going to continue to be in a lot of trouble, and there’s going to be a lot of hurt if that does not stop,” he said.

Fauci said, however, that he can’t make an accurate prediction of the number of cases and deaths the US will see before the pandemic is over, but said, “It’s going to be very disturbing, I will guarantee you that.”

Fauci and US Centers for Disease Control and Prevention Director Dr. Robert Redfield stressed the importance of wearing masks during testimony before a Senate committee on Tuesday, with Fauci saying “we recommend masks for everyone” and “masks are extremely important.”

The urgent message from top US health experts came during a hearing on the latest efforts by the US government to contain the pandemic, as several states struggle to contain the virus amid rising cases and state reopenings. The US reported more than 40,000 new Covid-19 cases on Friday, its biggest daily jump yet.

Redfield singled out younger Americans in particular to deliver a message that they are not exempt from the necessity of wearing a mask.

“It is critical that we all take the personal responsibility to slow the transmission of Covid-19 and embrace the universal use of face coverings,” he said. “Specifically, I’m addressing the younger members of our society, the Millennials and the Generation Zs — I ask those that are listening to spread the word.”

Fauci spoke of the across-the-board importance of wearing masks.

“We are all in this together,” he said, adding, “We recommend masks for everyone on the outside, anyone who comes into contact in a crowded area. You should avoid crowds where possible and when you’re outside and not have the capability of maintaining distance, you should wear a mask at all times.”

Fauci indicated that he would support an effort to increase the production of high-quality masks in the US and distribute them free of charge to the American public in response to a question from Vermont independent Sen. Bernie Sanders.

“Masks are extremely important,” Fauci said, adding, “There’s no doubt that wearing masks protects you and gets you to be protected. So it’s people protecting each other. Anything that furthers the use of masks, whether it’s giving out free masks or any other mechanism, I am thoroughly in favor of.”

More than half of all states are seeing a rise in cases, and Florida, Texas and Arizona are getting hit particularly hard. Texas has begun scaling back its reopening, and beaches in Florida have closed for the upcoming holiday weekend.

Experts testify on vaccine development as the FDA gets more involved

Dr. Stephen Hahn, commissioner of the US Food and Drug Administration, said the FDA is taking action to help coronavirus vaccine developers get through the approval process faster.

“I am pleased to announce that today, FDA is taking action to aid the timely development of a safe and effective vaccine to prevent Covid-19 by providing guidance for developers, with recommendations on the data needed to facilitate manufacturing, clinical development, and approval,” he said.

Hahn said the FDA is committed to “help expedite this work,” but added, “We will not cut corners in our decision making.”

Hahn said the guidance will “provide regulatory clarity around what FDA expects with respect to those data. We want to see certain parts of those data so that we can demonstrate to the world, to the nation, to the American people, that we are following our rigorous standards with respect to safety and efficacy.”

“This is particularly as important as we know that some people are skeptical of vaccine development efforts,” he continued, adding that “public confidence in vaccines is so important.”

Separately, Redfield said there was “substantial disappointment with American Airlines” when the airline announced it would stop limiting seat sales on airlines.

“I can tell you that when they announced that the other day, obviously there was substantial disappointment with American Airlines,” Redfield said. “I can say this is under critical review right now by us at CDC. We don’t think it’s the right message.”

Last week, American Airlines said it plans to begin selling every seat on flights, something it has not done since the pandemic struck this spring.

The airline responded to criticism of the decision, saying in a statement Tuesday that it is committed to the “safety and well-being of (its) customers and team members.” The airline said that it has “multiple layers of protection” for passengers and that it provides flexibility to those who want to change flights.

Fauci and Redfield testified before lawmakers last week, when Fauci said “we’re going to be doing more testing, not less,” in response to President Donald Trump’s recent claim that he asked his administration to slow down testing during the pandemic.

Senators have been weighing another stimulus package in recent weeks as unemployment numbers remain worrisome and economic hardship stemming from the pandemic persists. Republicans remains divided on the size and scale of the next stimulus bill and while it has been discussed for months, the next phase of economic relief is still weeks away. But there is now broad agreement something has to be done — something that wasn’t always the case.

In Capitol Hill’s last round of aid, Congress boosted unemployment checks by $600 a week and added 13 weeks of pay, beyond what states offer. The additional money will expire on July 31 without congressional action, but the 13-week extension will remain in place until the end of the year. A second round of stimulus payments is on the negotiating table in Washington, but some of the 160 million Americans who got money the first time could be left out, according a more targeted approach the administration is pushing for.

Republicans have zeroed in on the last week of July to reach agreement on the next round of stimulus legislation. Senate Majority Leader Mitch McConnell has been adamant for weeks on that timeline and the administration is on board.

This story has been updated with additional developments Tuesday.