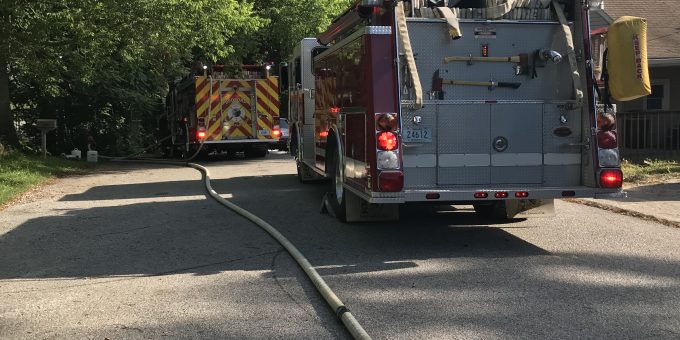 (BEDFORD) – An off-duty firefighter reported a house fire around 7:10 a.m. this morning in the area of John Williams Boulevard.

The exact location of the fire could not be pinpointed at the time of the call.

Bedford Firefighter Leyton Craig just got off his shift and was traveling home when he discovered the blaze.

The fire was then located behind the Samco Tool Company at 1000 U Street.

Bedford firefighters fought the blaze from the 1000 block of T Street, as they stretched lines down a hillside to access the blaze.

“When firefighters arrived the structure was fully involved in flames. All three fire stations responded to the blaze. No one was injured fighting the blaze,” according to Battalion Chief Neil Riley Bedford Fire Department.

Firefighters used a combination of water and foam to get the blaze under control.

Bedford firefighters were still on the scene as of 10 a.m. dousing hot spots and making sure the fire was completely out before leaving the scene.