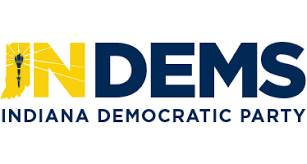 (INDIANAPOLIS) — Indiana Democrats are announcing this week who will run for state attorney general in November.

Longtime state Sen. Karen Tallian and former Evansville Mayor Jonathan Weinzapfel are vying for the nomination, a selection made by state delegates rather than primary election voters.

But due to concerns raised by the coronavirus pandemic, this year’s convention Saturday was a virtual one. Convention delegates received their mailed ballots in May and had to turn them in by Friday, said Indiana Democratic Party spokesperson Phil Johnson. Votes will be tallied through Wednesday, with the Democratic nominee announced Thursday.

Both Democratic candidates have taken their campaigns almost entirely online, focusing largely on issues like healthcare access and criminal justice reform. Incumbent Curtis Hill was a motivation to run, too. Tallian noted Hill’s “personal misbehavior problems,” while Weinzapfel emphasized Hill’s “ongoing efforts to destroy the Affordable Care Act.” The Republican attorney general is finishing a monthlong suspension that was ordered by the state Supreme Court after four women said he groped them during a party.

The question remains whether Hill will be replaced on the ticket by one of three challengers. Republicans won’t decide their nominee until July.

“The state party conventions are a great time for people to gather and see old friends, to help build the party platform, to take care of the mechanics of nominating people for statewide offices and for convention delegates,” said Robin Winston, former state Democratic chair under Frank O’Bannon. “But we’ve all had to adjust – there are some changes to deal with this year, for sure.”

Here are the Democratic candidates:

Tallian, 69, has represented portions of northwest Indiana in the state Senate since 2005. Access to health care, abortion rights and marijuana reform laws are chief among the policy issues Tallian has championed in the General Assembly.

“When it comes to Curtis Hill, he and I disagree on almost all of this,” Tallian said. “He’s on the opposite side of all the policy positions I have.”

Hill, a conservative, joined Indiana with 19 other states in 2018 to challenge the constitutionality of the 2010 Affordable Care Act. He has also used his office to impose additional abortion restrictions and further ongoing efforts to strike down abortion-related laws.

But what Tallian said sets her apart from her party opponent, Weinzapfel, is additional support she’s earned from Libertarians and “middle-of-the-road Republicans.”

If she wins the nomination and is elected attorney general come November, Tallian said her efforts would first target affordable healthcare by removing Indiana from the pending litigation challenging the Affordable Care Act. She also plans to focus on consumer protection issues and fighting Medicaid fraud.

Criminal justice reform, too, “is critical right now,” Tallian said. In addition to reducing the state’s incarceration rates, the state senator said she wants to be on the front lines of discussions and action plans coming together to “make sure what happened in Minnesota doesn’t happen again.”

Weinzapfel, 54, said his experience at the statehouse, in local government and in the private sector makes him “especially equipped” to serve as the state government’s top lawyer.

A state representative from 1999-2003, much of his recent experience in Evansville is what Weinzapfel said has equipped him with the “strong leadership qualities” needed by Indiana’s next attorney general: He served as mayor of the city from 2004-11 and as chancellor of Ivy Tech Community College in Evansville from 2014-19. He’s a partner at the law firm of Jones Wallace.

Like Tallian, Weinzapfel said his campaigning tactics have shifted due to the coronavirus. He’s made close to 1,000 personal phone calls to delegates and has “gotten very comfortable with loads of Zoom meetings.”

“When I first got into this race in early December, I thought this was going to be a campaign focused on Curtis Hill’s ethical transgressions and his efforts to find the Affordable Care Act unconstitutional,” Weinzapfel said. “But there’s a new dynamic now, and folks have different concerns – concerns that aren’t being addressed like they should be.”

His first priority if elected in November is, like Tallian, to withdraw Indiana from “the fight against affordable healthcare.” Weinzapfel said he additionally hopes to quickly secure “large settlement potential” for pending litigation against opioid manufacturer Purdue Pharma.

With ballots already cast for the attorney general position, Democratic delegates met via Zoom on Saturday. In addition to the attorney general nominee, delegates this week will make official the party’s selection for lieutenant governor nominee. Former state Rep. Linda Lawson of Hammond, a retired police officer, is the only candidate for that position. She will run alongside the party’s gubernatorial nominee, Dr. Woody Myers.

While Winston, the former state Democratic chair, is declining to endorse either Democratic candidate for the attorney general nomination, he stressed for Hoosier voters to “pay attention to the actions and inactions of the current attorney general in the middle of a pandemic.” Both Tallian and Weinzapfel, he said, have “the public and their health” in mind – something Winston said Hill has neglected to do.

The Indiana Republican State Convention, also being held virtually, will also follow on Thursday, scheduled to be broadcast from 5:30-7 p.m. by WISH-TV. Gov. Eric Holcomb and lieutenant governor Suzanne Crouch, seeking second terms, along with the four candidates seeking the attorney general nomination are slated to speak.

The spotlight is expected to be on Hill, who must convince delegates that he deserves a second term despite his misconduct allegations. Hill, 59, has denied doing anything wrong at a party marking the end of the 2018 state legislative session where four women said they were groped. His suspension ends Wednesday.

The votes for the Republican candidates will be mailed in by state convention delegates by 5 p.m. July 9. Those results will be announced by the party July 10.

Information: Casey Smith is a corps member for the Associated Press/Report for America Statehouse News Initiative. Report for America is a nonprofit national service program that places journalists in local newsrooms to report on undercovered issues.