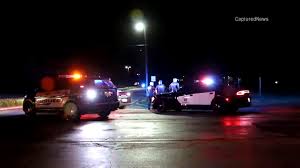 (CROWN POINT) — An armed robbery suspect was killed and a state trooper was wounded and hospitalized following a shootout on Interstate 65 in northwestern Indiana, police said.

When the stolen vehicle got a flat tire and slowed down, the driver got out and began shooting at the troopers, hitting one of them, police said. Troopers returned fire, and one of them hit the male suspect. The suspect was pronounced dead at the scene.

One of the troopers applied a tourniquet to the wounded trooper’s leg before he was taken to a Crown Point hospital, police said. The injury was not thought to be life-threatening.

The names of the troopers haven’t been released.