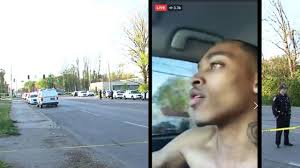 (INDIANAPOLIS) — The Indianapolis Metropolitan Police Department suspended a detective whose remarks about the body of a man fatally shot by another officer sparked criticism, the police chief says.

The detective was captured on video after the shooting of Dreasjon “Sean” Reed saying: “I think it’s going to be a closed casket, homie,” an apparent reference to a closed-casket funeral.

Chief Randal Taylor, who has called the comments “unacceptable,” said Wednesday that the man received a suspension of numerous days and has been reassigned to another unit, The Indianapolis Star reported. Taylor did not provide any additional information on the disciplinary action.

Events surrounding the shooting of Reed, a 21-year-old black man, were live-streamed on Facebook, apparently by Reed’s cellphone.

The shooting on May 6 prompted multiple protests. Hours later, Indianapolis police officers fatally shot another black man, 19-year-old McHale Rose. In between those two shootings, an officer fatally struck a pregnant woman with his car. The woman was white.

Police have said both Reed and Rose were armed and exchanged gunfire with officers.

Reed was fatally shot by an officer during a foot chase that followed a police vehicle pursuit. Police have said the pursuit began after officers, including Taylor, observed someone driving recklessly on Interstate 65,.