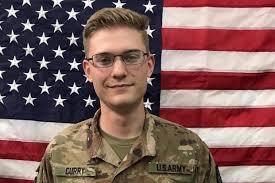 (FORT WAINWRIGHT, Alaska) — A U.S. Army soldier who was based at Fort Wainwright in Alaska has died in Iraq, the Department of Defense announced Tuesday.

Sgt. Christopher Wesley Curry, 23, of Terre Haute, Indiana, died from a non-combat-related incident Monday in Iraq, the department said in a news release. The release said the matter is under investigation.