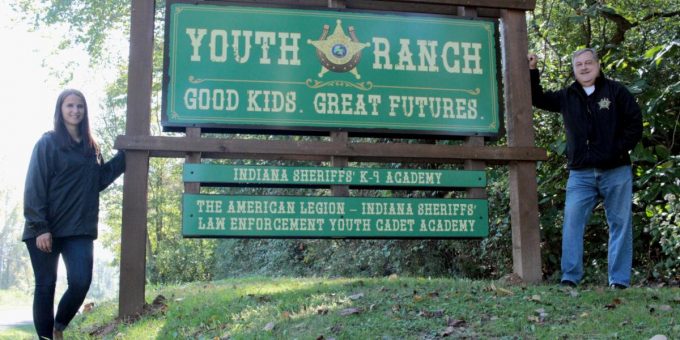 (BRAZIL) – Ten of the state’s top sheriffs have been re-elected as trustees of the Indiana Sheriffs’ Youth Ranch, a non-profit academy under development to mentor future law enforcement officers, bond with at-risk kids and comfort young witnesses and victims of crime:

“These sheriffs display the exact qualities we want in our Youth Ranch leaders – reputations for well-run departments, strong community commitments and deep understandings of today’s issues facing young Hoosiers,” said Scott Minier, ISYR executive director. “Each has been extremely valuable in providing his reasoned advice during our early months and is now lending his name and time raising money, so we can build our youth cabins, peace chapel, stable and recreation areas.”

Most have helped lead the project since its inception in 2016. Last year, the volunteer group had raised enough private donations to purchase a West Central Indiana property featuring three lakes and 62 acres of rolling woods.

A former veterinary clinic on the Youth Ranch property was remodeled and expanded to become the Search and Rescue Training Center for the Indiana Department of Homeland Security – providing lease income to help sustain the Youth Ranch and K-9 and drone training experiences for visiting teens, Minier said.

Several unsafe, unwanted barns were demolished with the help of Indiana Department of Correction inmate workers and personnel, as well as MacAllister Machinery, Minier added.

An existing five-bedroom home is being transformed into a Sheriffs’ Lodge and Conference Center with the help of Mohawk Flooring, Sherwin-Williams and Ashley Furniture Homestores, he said.

This fall, the ISYR board of sheriffs and former sheriffs across Indiana is establishing a group of Student Advisors For Educating Tomorrow’s Youth (S.A.F.E.T.Y.) Leaders, who will help advise the sheriffs and deputies as they determine programs and policies for the not-for-profit training retreat.