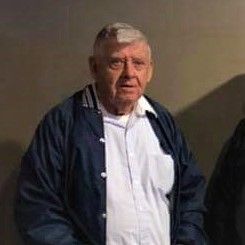 He was born November 5, 1934, in Martin County to Harvey W. and Mildred (Waiman) Wraley. He married Shirley Abel on September 3, 1955, at the Loogootee United Methodist Church Parsonage.

He was a graduate of Shoals High School, was a member of the Shoals Christian Church, was retired from the U.S. Gypsum with over 35 years of service and following retirement drove truck for Stonebelt Trucking for 15 years.

He is preceded in death by his parents and two brothers, Bruce and Larry Wraley.

Private services are planned for the family.

In lieu of flowers, the family has requested memorial contributions be made to the Alzheimer’s Association.

Arrangements are entrusted to the Queen-Lee Chapel of the Thorne-George Family Funeral Homes.