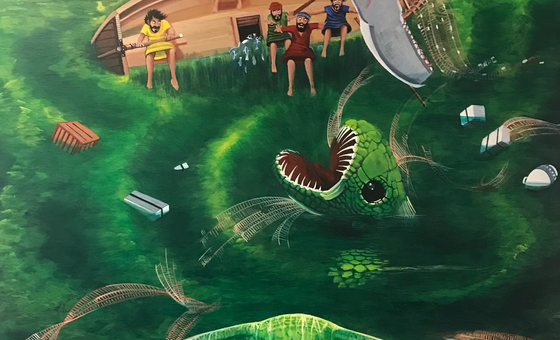 He resides in a unit reserved specifically for offenders participating in the Purposeful Living Unit Serve (PLUS) Program.  The program is a faith and character-based re-entry initiative that offers participants alternatives for rehabilitation.

Whether participants choose to learn from character-based materials or faith-based materials, the living units are geared towards teaching core fundamental values and providing positive reinforcement through learned behavior. The emphasis of this voluntary initiative focuses on strengthening spiritual, moral, and character development as well as life-skills.

During Adam’s time in the PLUS unit, he has found a sense of peace through painting.  He has created numerous pieces of art that are not only on display in varying locations throughout WVCF, but also in the community.  Community Service Director Jackie Storm stated that Offender Adams has donated several paintings for community fundraisers. It’s one way that Adams is able to give back to society.

Most recently Adams was asked to paint murals for a new boys home opening in Lyons, Indiana.  The home, known as the HEbron Home for Boys, is currently going through the inspection process with the Department of Child Services (DCS) and Homeland Security (Fire Marshal). Once the inspection process is complete and all requirements are met, the home will be cleared to open.  When it does, Adam’s murals will be there to inspire the boys.

Open Arms Christian Ministries is a non-profit organization that is opening the home.  When they sought Adam’s assistance they had specific Bible stories they wanted Adams to paint murals of.  Each story was selected based on how it coincided with the purpose of the wing.  The hope is that the stories will help the boys relate their struggles to those in the Bible and thus gain strength to face whatever challenges they have.

For the long-term residential wing, they chose the story of Joseph. The story of Joseph began when he was only 17.  Joseph’s story revolved around a series of dreams that God gave him showing him that someday his brothers would bow down to him.  After hearing the dreams his brothers sold him into slavery. Joseph spent a total of 17 years in slavery and imprisoned, yet he did not give up on God.  He continued to work wholeheartedly to live out a faithful life in spite of his circumstances, and as a result, God blessed the work of his hands.  When asked why Open Arms chose the story of Joseph for the long-term wing Community Relations Director Nick Schneider stated, “Joseph learned many life lessons from what we would consider the ‘school of hard knocks’, but he remained true to his love and devotion to God.  We want our young boys to learn to wait in faith, as Joseph did, to realize their purpose and God’s plan for their lives.  Joseph’s battle to see the vision for his life fulfilled did not come full circle for years, which is what some of our boys may face.”

For the emergency wing, they chose the story of Jonah.  The story of Jonah began when Jonah was running from God.  God had directed him to go to Nineveh to warn the people of the destruction that God would send if their wicked ways did not change.  However, Jonah refused to do as God instructed.  Instead, he boarded a ship in an attempt to run from God.  While he was on the ship God sent a terrible storm that caused Jonah to be thrown into the ocean and swallowed by a fish.  While in the fish’s belly he prayed for mercy and was vomited out onto land.  It was then that he decided to follow God’s leading.  When asked why Open Arms chose the story of Jonah for the emergency wing Director Schneider stated, “It did not take long when Jonah found himself in an ’emergency situation’ for him to realize that he needed to be obedient to the plan God had for his life.  That is something our boys will need to realize when they are only with us a short time.”

Adams studied the Bible stories before creating the murals.  When asked about the experience Adams stated, “Sometimes life seems unfair.  Cruel almost.  But if you learn to look beyond yourself at the better things, you may change your life and those around you.  Learn compassion.”