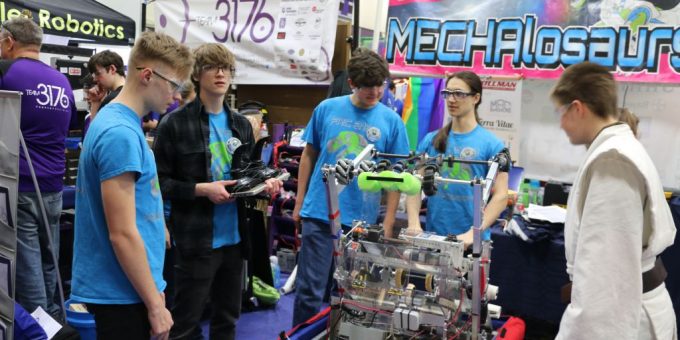 (BLOOMINGTON) – After two intense days of competing robots, veteran robotics team 234 – Cyberblue Robotics from Indianapolis, robotics team 1720 – PhyXTGears (pronounced Fixed Gears) from Muncie, and robotics team 7657 – ThunderBots from Evansville have emerged as champions from the Bloomington District Robotics Event. In order to win, these teams were required to face 33 other teams from across Indiana in a series of qualification matches. The stellar performance from team 234 – Cyber Blue from Indianapolis, put them as captain of the number one seeded alliance, allowing them to pick team 1720 – PhyXTGears (pronounced Fixed Gears) from Muncie, and team 7657 – ThunderBots from Evansville as alliance partners.

Play-off matches were fierce, and fans were on their feet in the stands cheering. The alliance captain of the first seed, team 234, worked with team 1720 and team 7657 to secure the victory.

“We weren’t very confident at first, because we literally finished our robot at the event. But we worked hard and we’re so happy it worked out,” said a drive team member from team 234. Another drive team member added, “We were just feeling so much stress and relief at the same time.”

“It feels like a fire was a happy thing,” said a drive team member of team 1720 as she tried to convey the intensity of the emotions she was experiencing.

This event was the first one for the 2020 season. Presented by the Indiana Army National Guard it was the first time a FIRST FRC competition had been hosted in Bloomington.

The Indiana Army National Guard sponsored the Bloomington District Event. They are invested in FIRST® because FIRST® students represent their target audience of people they would like to recruit. They have branches to appeal to every FIRST® student, with jobs available for mechanical and computer engineers, as well as marketers. The Indiana Army National Guard also recognizes that the 21st-century soft skills FIRST® students are developing, such as leadership, problem-solving, and communication skills, are invaluable.

The next competition is this Saturday and Sunday, March 14-15 at Penn High School in Mishawaka Indiana.

Later in April, the Indiana State Championship will be in Lafayette Indiana on April 4th and 5th at Jefferson High School.

FIRST®, however, is more than robots. FIRST® Alumni qualify for FIRST® scholarships, and some FIRST® Scholarship providers were represented at this event, including Kettering University, Indiana University, and Hanover College. Over 80 million dollars in scholarships are available to FIRST® alumni.