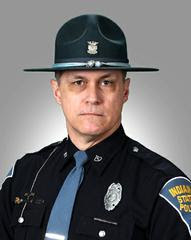 (MORGAN CO.) – Master Trooper Doug Perry recently completed his 35th year of service to the citizens of the State of Indiana.

M/Trooper Perry has held numerous assignments during his 35-year career including the Vehicle Crimes Unit, FBI Investigations and the Tactical Intervention Platoon (Riot Squad). M/Trooper Perry had previously been certified as a Technical Crash Investigator, a Horizontal Gaze Nystagmus (DUI) instructor, an Applicant Background Investigator and is currently certified as an Indiana Data and Communications System (IDACS) operator.

M/Trooper Perry has been married for 30 years and is the father of 6 children.

He and his wife are currently in the process of adopting a child they have raised for the past two years. They have been Foster Parents for approximately fifteen years, fostering close to 130 children and are also Foster Parent Hall of Fame Award recipients!

M/Trooper Perry’s ISP family includes a cousin, First Sergeant Bill Bronner, who retired from the Indianapolis District, and a Brother and Son who also served as Indiana State Police Employees.