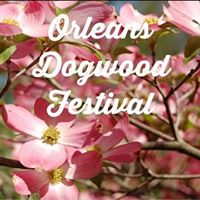 (ORLEANS) – The Orleans Chamber of Commerce is finalizing plans for its upcoming 2020 Dogwood Festival. This year will mark the 52nd anniversary of the celebration of the blooming dogwood, which is set for April 18 through April 25.

This year’s general theme is “Dogwood Festival 2020: Visions of Color, Life, and Art!”

New this year on the opening date of Saturday, April 18th will be a Classic Car Show on the historic Congress Square.

Another new event on April 20th is Meet the Author with bestselling writer Phillip Gulley and an old-fashioned square dance demonstration.

Back by popular demand will be the Dogwood Murder Mystery Dinner Theatre titled “Murder at the Art Show” on April 24, 25, and 26th.  The cost of dinner and the show is $12 per person. Tickets must be purchased in advance. The dinner show, which will be staged at the Orleans Wesleyan Fellowship Hall, is in partnership with The Orange County Players.

The Dogwood Baby Contest is set for Saturday, April 18th with Hannah Carter serving as chairperson.  The longtime festival event will be held at the Orleans High School practice gym beginning at 9 a.m.

Ashley Knight is once again chairing the now combined Dogwood Pageants with Eileen Gilbert as her Co-Chair. This year both the Little Miss and Queen Crowning will take place on the same day April 18th at 5 p.m. at Orleans Elementary School. As has become a tradition the 2020 “Mr. Dogwood” will also be named during the intermission of the queen crowning ceremonies.

The popular Dogwood Pedal Bike Ride will be returning to this year but will actually take place in late May. The ride is set for the morning of May 30th from the high school area. Online early registration is recommended but you can register the day of the event from 7 a.m. until 9 a.m. More ride details are available Dogwood Pedal link found on the Dogwood website.

The Chamber’s Annual Town Wide Yard Sale is set for April 17-18.  The Chamber will pay for advertising for anyone wishing to have a yard or garage sale on that weekend. Everyone is welcome to participate and there is no fee to participate. Contact Neva Stroud at The Progress Examiner to be included in the advertising.

The Orleans American Legion will once again provide the Midway. Brady’s Amusement will set up and operate the entire week as in the past. Advance sale dates of bracelet night tickets will be announced.

The entertainment lineup for the main stage this year is being expanded and will include performances by the Breeding Sisters, Worth the Journey, country music entertainer Adam Crabtree and Sean Steele & Friends. Special performances are also planned during the festival week by the Orleans Elementary School and Orleans High School Choirs and Orleans High School Pep Band.

Longtime Orleans educator and administrator Gary McClintic has been chosen as this year’s Grand Marshall and will lead the parade through the streets of the Dogwood Capital on Saturday, April 25th beginning at 2 p.m.

The Chamber is now accepting entries for the event and everyone is being encouraged to participate in this year’s Dogwood Parade. Entry forms may be found inside The Orleans Progress Examiner and also online from the dogwood website.

Vendor applications are still being accepted for arts and craft type vendors to be set up in the park during festival week.

The festival planning committee will meet again on March 17th at 6:30 p.m. at Orleans Town Hall.   All event chairmen and anyone interested in helping with this year’s festival is urged to attend. Supporting organizations are also asked to have a representative present at this meeting.