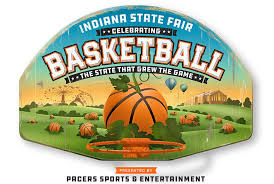 (INDIANAPOLIS) – “Basketball” is the theme for this year’s Indiana State Fair celebrating the state’s rich history of the sport.

This year’s fair is presented by Pacers Sports & Entertainment and will feature several interactive experiences just for fans.

“Indiana has a rich basketball heritage, so we are thrilled to offer a theme that will bring this sport to life,” said Cindy Hoye, executive director, Indiana State Fairgrounds & Event Center. “The Indiana State Fair is the greatest showcase of agriculture and entertainment and I can’t tell you how excited we are to share the history of basketball, along with many exhibits and installations that tell the story of how our how great state grew the game.”

Fair officials say while football was gaining popularity across the nation in the late 1800s, Indiana schools were mostly in small, rural communities with too few students to have a football team. However, most could put a basketball team together.

The game was more affordable and the playing season worked better with farmers’ planting and harvest season. After each harvest, farm kids could play basketball and then return to the fields for planting in March when the season ended. This gave birth to the tradition of Friday night high school basketball.

“The Indiana State Fair is an annual celebration of agriculture, entertainment, and what it means to be a Hoosier,” Indiana Gov. Eric Holcomb said. “Perhaps the only other Hoosier tradition that brings together as many fans, as much nostalgia, and that sense of hometown pride is the love of basketball that’s swept our state for more than a century, which makes it the perfect theme for this year’s fair.”