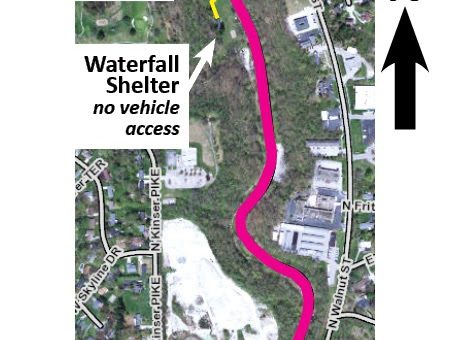 (BLOOMINGTON) – The City of Bloomington is proposing an expansion of its system of walking and bicycling trails with a pilot conversion of a 0.6-mile section of Old State Road 37 North to a pedestrian- and bicycle-only trail.

The conversion will extend from a point just north of the Rogers Group quarry entrance to just south of the playground parking lot from March 13 through September 30.

The pilot program is pending approval by the City’s Board of Public Works at its meeting on Tuesday, March 3 at 5:30 p.m. in Council Chambers at City Hall (401 North Morton Street).

Mayor John Hamilton invites residents to a kickoff event taking place in the park Saturday, March 28 from 1 to 2:30 pm, featuring a 100-meter kids’ dash and a one-mile fun run/walk for all ages.

One of seven public amenity improvements being funded by City Bicentennial Bonds issued in 2018, the pilot trail project is intended to expand and integrate with Bloomington’s network of walking and bicycling trails; provide a safe, accessible destination for recreation and exercise; and offer bicycle commuters additional options for safer routes.  All of these goals were identified as priorities through both the Parks and Recreation Department’s Master Plan 2016-20, and the City of Bloomington’s most recent Comprehensive Plan, adopted in 2018. Proposed by the mayor and approved by the Bloomington Common Council in 2018, the Bicentennial Bonds will fund additional trail projects around Griffy Lake and from Wapehani Mountain Bike Park to Switchyard Park, and a protected bike lane along Seventh Street.

“Piloting this Lower Cascades road conversion is part of a larger vision of expanding Bloomington’s trail system and responsibly stewarding our green space, ” said Mayor John Hamilton. “We are optimistic about the positive things that can happen when we can slow down and experience the park.”

An online survey conducted by the Bloomington Parks and Recreation Department in March 2019 showed about 30 percent of respondents use the road through Lower Cascades Park for either walking, running, or bicycling. The road’s conversion reintegrates the park’s divided space and reinforces its identity as a destination.  Additionally, removing motorized vehicles from the road establishes a safer environment for cyclists, hikers, runners, playground users, and other park visitors.

For cyclists and pedestrians, the converted road will provide a much-needed connection from Miller-Showers Park on the city’s north side along Gourley Pike to the Ferguson Dog Park, Griffy Lake trails, and Cascades Park Trail.  Alternatives to this north-south thoroughfare for motorists include North Kinser Pike, North Walnut Street, and North Dunn Street.

The large parking areas at the Sycamore Shelter, located at the intersection of Clubhouse Drive and Old State Road 37 North, and at both the north and south ends of the playground, will remain open. Additional trailhead parking to access the Cascades Park Trail and the converted road is available at the Ferguson Dog Park, the ballfields at Lower Cascades Park, the Lions Den Shelter at Upper Cascades Park, Cascades Golf Course, the Skate Park at Upper Cascades, and the 17th Street parking lot at Miller-Showers Park. Limited parking will also be available on the shoulder of Old State Road 37 North under the State Road 45/46 overpass on Gourley Pike.

During the trial period of the road conversion project, those who visit the park are encouraged to provide feedback about how the road conversion affected their visit. A link to the online survey to take after experiencing the pilot project will be available here March 13.  The City will gauge park usage during the pilot using multiple data points, including shelter reservations, water use, and trash levels.  Survey feedback and data about park use will inform a decision about the road’s long-term conversion.