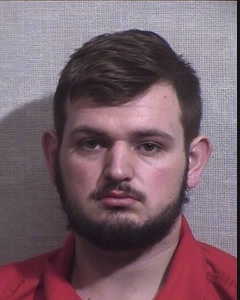 (SEYMOUR) – Indiana State Troopers from the Bloomington District were recently given information of alleged drug dealing that was occurring in Jackson County.

Troopers Cody Brown, Cory Knight, and Benjamin Smith, along with Mitchell Police Officer Shaun Cabral arrived at a residence on Oesting Street in Seymour early yesterday morning and spoke to the homeowners.

Officers were invited in the home where they spoke to 19-year-old Bryce Lee Alexander Riley, of Seymour.

Officers were given three individually packaged bags containing a white crystal substance, a digital scale along with a large amount of money.

Other items of evidence were also seized.

Riley was cooperative throughout the investigation. He was transported to the Jackson County Jail on charges of dealing meth, possession of meth and possession of drug paraphernalia.