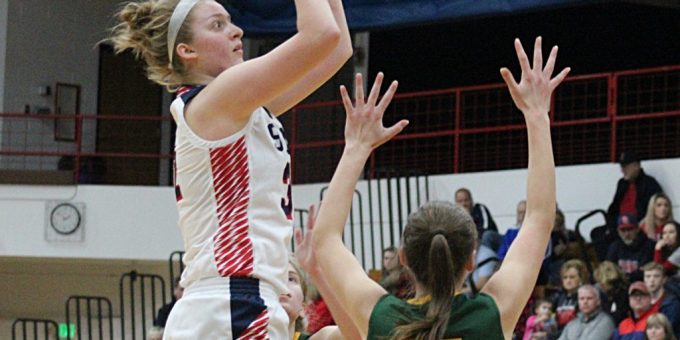 BEDFORD – When the 2019-20 basketball campaign began, the whispers around the region were buzzing with doubt and skepticism. Bedford North Lawrence was finally vulnerable, the walls of the kingdom were showing cracks. The royal diadem was heavy.

Reports of BNL’s imminent demise were greatly exaggerated. Never underestimate the power of the throne to inspire, never miscalculate the heart of those left to defend the crown.

Not only did the Stars fend off the circling vultures, they rose to greater heights, winning conference, sectional and regional championships during a remarkable run to the Class 4A Final Four.

BNL capped a fantastic season with a 21-6 record, falling to Lawrence North in the semistate at Jeffersonville. That was an ending few believed possible when the Stars were slumped at 3-3 after a tough Thanksgiving week. Did they overachieve? That term is used quite frequently. Did they reach their maximum potential? That seems to fit this group much better.

After losing so many key pieces from the previous season, including the 2019 Miss Basketball (Jorie Allen), the questions were valid. BNL answered them all before falling one win shy of the ultimate stage.

“I’m always going to think we can compete for a conference and sectional championship, that’s just Lady Stars basketball,” BNL coach Jeff Allen said. “I think it’s engrained in our kids and they expect that.

“To play at a higher level, after the first game (a loss to Mooresville), I wasn’t sure. But when we were 3-3, we had played really well except for a few quarters. My staff and I thought this team could be really special by the end of the year, we really felt that way.

“I think we played at the level of basketball I envisioned.”

The struggling start was obvious during late November losses to North Central (59-52 on the road) and Jeffersonville (56-53 at home after blowing an 18-point lead). From that point, BNL became a juggernaut, winning 18 of the next 20. There was no magic moment, just a resolve to improve and prove to the outside world that BNL basketball was not crumbling.

“We just had to bond together,” BNL junior forward Irye Gomez said. “When we were 3-3, we were down. We just had to pick each other up. If we wanted to be the best we could be, we had to start getting it together.”

They won their next 12 against in-state competition, losing only to national power Mount Notre Dame in Cincinnati, and tore apart some quality opponents during that run. After slipping against 3A state finalist Salem, they roared through the sectional, winning three games by 30-plus points.

“That was everybody’s main thought. Just keep that streak,” BNL senior Madison Webb said. “Not very many people thought we would make it out of the sectional. We didn’t have as much experience as we had in the past. But over the season we improved so much as a team, and as individuals. Winning the sectional was a huge weight taken off us.”

BNL backed up that performance with two impressive victories in the regional at Columbus North, stopping Evansville North (55-40) and East Central (54-48) in a thriller. BNL’s bid for the state finals came up short against Lawrence North as the Wildcats shut down BNL’s offense for a 53-43 triumph.

What a ride, for a team once doubted.

“We worked hard every day,” Gomez said. “I know there were people out there that didn’t think we were going to win the sectional this year, without the seniors we had last year, and we exceeded everyone’s expectations by a lot.

“It was our chemistry. Everybody knew we had a goal, and it was definitely winning our ninth consecutive sectional. We all just put our heads together and made sure we were working hard and getting done what we needed to get done.”

BNL had offensive stars, with junior Chloe McKnight (14.1) draining 3-pointers (71) and scratching for rebounds, with Webb (13.0 points, 6.4 boards) dominating the paint, with Gomez (12.5) slashing in transition or popping that deadly corner jumper.

“We had a lot of weapons, but the big thing is we had kids that bought into their roles,” Allen said. “We had kids that had great chemistry. And they just refused to lose a lot of times. There’s a lot to be said about having pure talent, but those intangibles are hard to gauge. Sometimes you don’t realize how strong those are, but you look back and say ‘Wow, we were pretty good because of that.’

“We had a lot of balance on this team, we had the ability to score from multiple positions. But we had mental maturity on this team. We had kids that really grew up and matured, understanding what was expected and what they needed to do on the floor for us to be successful.”

BNL will lose the three seniors, including two starters, looking for replacements to fill the void of Webb’s post power, of Crulo-Rood’s infectious demeanor and defensive aggression.

“We’re losing size,” Allen said. “You can’t coach 6-foot-3. That’s something we’ll have to battle next year. We’ll have to make some changes in how we play.

“Madison became a capable scorer, and it was hard to leave those perimeter shooters when you had to worry about Madi inside. Madi and Gracie provided great leadership. This team was very much a cohesive unit all year long, and that has a lot to do with those two kids. That’s what you want kids in your program to do.”

“I think we upheld the tradition,” Webb said. “I don‘t think anyone thought of themselves. It was a team atmosphere.”