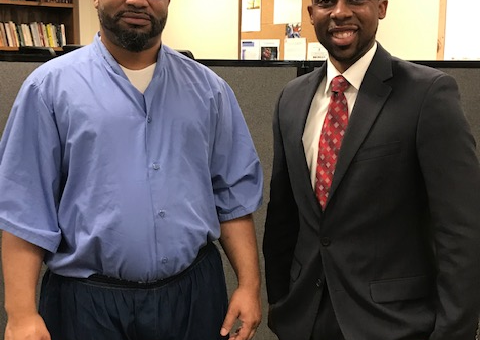 (CARLISLE) – Recently, WTHI News Anchor Rondrell Moore spoke during a Black History Event at Wabash Valley Correctional Facility (WVCF).  Community Service Director Jackie Storm extended an invitation to Mr. Moore in January to speak at the event.  Mr. Moore later commented, “I could not be more honored to take part in this event from the Wabash Valley Correctional Facility. I don’t take the privilege lightly, as it’s such an important message to share. I hope my words will inspire and uplift those in attendance.”

The first story Moore shared was written by James Weldon Johnson.  It told of a group of men who celebrated Lincoln’s birthday in Jacksonville, Florida in 1900.  James Weldon and his brother, Mr. Rosamond Johnson, wrote a song for the event that the children of Jacksonville sung for over 20 years.  Mr. Moore then sang the song himself and shared how it had touched his heart, especially these two lines from the song, “Sing a song full of the faith that the dark past has taught us.  Sing a song full of the hope that the present has brought us.”

The second story Mr. Moore shared was one of great bravery.  It told how Henry Brown had escaped slavery in 1849.  Mr. Moore explained that in order to obtain freedom, Brown had wedged himself into a three by two foot box being shipped from Richmond to Philadelphia.  During transport he spent 90 minutes upside down on the deck of a steamship before a passenger happened to turn the box over for a place to sit.  It took Brown 27 hours in a box to gain his freedom.

Moore went on to tell about the struggles of others in history.  He also spoke of his faith and how it had impacted his life.  He then encouraged the offenders to share their stories about those that had influenced them.  The atmosphere was relaxed and allowed for a very positive dialogue.  Several offenders spoke about African American role models they had ranging from family members to celebrity sports figures. The respect shown for the determined individuals that had walked before them, as well as those walking alongside them, radiated as they spoke.

Wabash Valley Correctional Facility Warden Brown commented, “We are very grateful to Mr. Rondrell Moore for taking time from his day to share time and fellowship with our offenders.” Brown concluded, “It’s very meaningful, not only to the offenders but to the staff as well, when a community leader shares the most valuable possession they own; their time.”