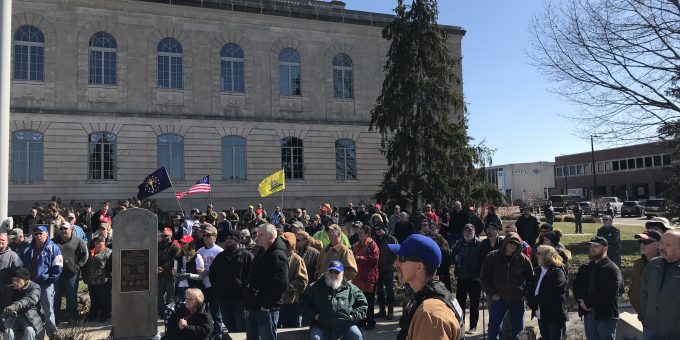 Lawrence County Sheriff Mike Branham said, “As you know, we are able to be here today because of our First Amendment Rights to Freedom of Speech, and to peaceably assemble. Please respect those rights. I want to be clear that I am not here to be a cheerleader for a specific cause. I am here to relay facts and be straight forward about my stance on the Second Amendment as it relates to my office. The Second Amendment to the Constitution of the United States, to paraphrase, guarantees the right of the people to keep and bear arms.”

“When I took the oath of office as Sheriff of Lawrence County, I affirmed that I will support and defend the Constitution of the United States of America and the Constitution of the State of Indiana and that I will faithfully and impartially discharge the duties of the office, according to the law,” added Sheriff Branham. “I fully intend to honor that oath with respect to both the constitution and law. There’s been a lot of chatter about Red Flag Laws that I would like to address. Indiana already has a Red Flag Law which has been in place for 15 years and is named after Indianapolis Police Officer Jake Laird.”

Officer Laird was shot down in the street responding to a call involving a mentally disturbed man who had previously had his guns taken by law enforcement and subsequently returned to him by the courts. One of those guns was used to murder Officer Laird. Soon after, Indiana adopted a Red Flag Law.

“Who knows what happened on Valentine’s Day two years ago? A 19-year old former student of Marjory Stoneman Douglas High School in Parkland, Florida walked into the school, murdered 17 people and injured 17 others. He had legally purchased the firearm used. I bring this up because at the time Florida did not have a Red Flag Law and they do now,” said Sheriff Branham.

“The 19-year old, whose name I will not mention, had slipped through the cracks,” Sheriff Branham continued. “He had multiple involvements with law enforcement, mental health services, multiple schools, and produced volumes of warning signs on the internet, which likely would have prevented him from obtaining a firearm.”

There remains a clear need for law enforcement to have this tool when necessary. The Lawrence County Sheriff’s Office only uses Red Flag Laws a few times a year when an individual presents an imminent risk of personal injury to themselves or someone else.

In addition to the Red Flag Laws, there are laws regarding felons and firearms, protective orders and firearms, and domestic violence and firearms among others that are used in the normal course of business by law enforcement. The Sheriff’s Department does not take those seizures lightly.

“I’ll finish with this: my dad gave me my first rifle, a .22-caliber Browning, when I was ten years old,” said Sheriff Brahman. “I still have it in my safe at home, along with what my wife would say are too many others. I’m not much of a hunter, but I do enjoy recreation shooting. So for the next 1,043 1/2 days, the end of my second term, no one in Lawrence County needs to worry about me or anyone from the Sheriff’s office coming to seize your guns unless it’s by way of current legal means that meet constitution standards.”

Brian Roth, from Westfield, Indiana, is a veteran and served more than 22 years in the Navy. His son is currently serving in the U.S. Marines. In his speech, he thanked veterans for their service.

During the last four months Roth tried to get on the ballot for Indiana governor. However, those efforts fell short at the Indiana Election Commission on Friday.

“This will not stop me from getting out my message that I feel is very important. We are going to continue to get that message out to whoever will listen and wherever you invite me to speak,” Roth said.

“When our rights and the law are in conflict, the law has to change. I applaud this Sheriff for upholding the law; that is what he should do. We need to change the law, when our rights are infringed. In my opinion, the political system does not agree with that.”

“The political system continues to chip away our rights. There are systems and institutions that govern our lives on God’s great earth. Family, Religion, Government, Education, Business; these things help govern our existence and are equally important. All serve a specific function,” Roth said. “But that is not what happens today; the political system sits on top of these other systems. The political system squeezes them and it pulls our power and authority away.”

Roth went on to describe how the political system believes it holds the moral authority to tell residents what is moral or immoral. He added that parental rights, churches, and educational rights are slowly being eroded away.

“We should not have Indianapolis tell us how to educate our children. Do you know how to educate your child?” Roth asked. “It keeps getting worse,” he added.

“Power and Authority have been pulled away, and we have to change that,” he added.

“We cannot allow the political system to sit on top of these other systems,” Roth told the crowd. So the solution Roth offered is to stop electing officials who are a part of the system.

“Last time I looked Kentucky is not the wild, wild, west and I think Indiana needs to be the 16th State,” he added.

“I am here to support my Lawrence County neighbors. This does not transcend county lines or state lines. Our rights are not only being chipped way just here in Bedford, but it is being chipped away all across the United States,” she added.

“Some of us traveled to Virginia. Why did we do that? Once again, like I am here today, we came to support our fellow Americans. The 2nd Amendment is an American Right! It is not an option to be taken away,” she added.

Watson noted, “Your Sheriff probably did something that was against his attorney’s advice. He came here today and stood up for the Constitution. Not every sheriff will do that. I am here to call out every sheriff in the state of Indiana who has not made a public stand in support of the Second Amendment. If he or she has not done that I ask, ‘why?'”

Watson spoke to a large number of veterans that attended the event. “God bless them; we are here today to assemble because these veterans sacrificed time, effort and sometimes their lives, so we can be here. When we move past the military the next line of defense is you and I. We are the militia, because when our military is away across the pond, in farther lands and places protecting us in the world, guess who protects us here at home?”

Members of the crowd shouted ‘us.’

“Do you think our state police, sheriff’s offices, and city police can do it by themselves?”

The crowd shouted ‘no.’

“How many police officers are being gunned down in the streets. We cannot stand for that. That’s not American, that is criminal,” she added.

She went on to say, “I want to give my hat off to every woman in this group. Women are the quickest, fastest, growing group of gun owners in the United States.”

Watson, a retired eighteen-year trooper of the Indiana State Police Department, did not know how to even fire a gun back in 1998. She was raised on a farm with five brothers in Bartholomew County she says that her family did not own a gun.

Members of the crowd replied ‘unsafe and vulnerable.’

One in four women is a victim of violence. “Mom’s that demand action would want you to think women should not arm themselves,” she added.

“I am here to tell you there is most likely a gun in that household. For those women who do not to know how to use it or protect themselves and their children… shame on us. Over the years women have started showing up in huge numbers. Because over the last five years as a National Rifle Association Instructor I have trained over 2,500 people and 85 percent of them are women,” Watson continued. “I have trained children as young as five-years-old in gun safety. They are able to understand gun safety. They are able to understand not to touch a gun unless an adult is present. Shame on us for not having gun safety classes in our schools.”

“Why in the world are we afraid to teach our children tools that will not only save their lives but the lives of someone else,” she added. “They are our tomorrow; they are our leaders of tomorrow and we should be providing them all the tools to deal with the dangers we currently live in. To keep themselves safe.”

Watson went on to describe the Self-Defense Statute in the State of Indiana as one of the best-written statutes written in the United States. The law provides a good samaritan clause. The statute states that residents are able to defend themselves and a third party.

“It should scare us to death that we have to assemble today to support our rights of our Second Amendment,” Watson added. “It should scare us that Virginia tried to pass the laws they tried to pass. When American citizens try to take away our Second Amendment Rights in our government we have a problem. I feel the government has gotten way too big, but I will tip my hat to those that are in government that are trying to keep our rights. We do have legislatures that are working on our behalf.

“We are the militia; whether we are wearing buckled jeans today, or camouflage pants, dress pants. It is not what we look like, the type of house we live in, the car we drive or if we live in a van by the river. As an American, you can do whatever you want… we are the last stand. United we stand, divided we fall. We must understand the division they encourage us to participate in is wrong. We have to put the division aside and vote for those who want us to be united. They want to overcome us, with our division.”

Petitions to have Lawrence County declared a 2nd Amendment Sanctuary were placed at several businesses throughout the county and petitions were being signed during the rally.

“We are trying to get at least 3,000 signatures and if we meet that goal we will try for over 10,000 signatures,” said Val Roberts.

John Peters of Mitchell said, “I fully support our efforts to be a 2A Sanctuary County. I served as a Marine for four years from 1994-1998. When I went out to California I seen a photo of Lance Cpl. Brian Lane and thought it was wonderful to see the picture of Brian. Once a Marine always a Marine. Brian died in Operation Desert Storm.”

Several people came from other counties to support the effort including the Soaring Angels motorcycle group from Monroe County who helped provide security, along with the Lawrence County Sheriff’s Department.

There were no protests and the event took place without any issues.