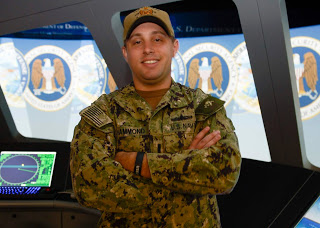 (MAYPORT, Fla.) – Lt. j.g. Michael Hammond, of Bloomington, was named Ship Handler of the Year serving aboard the USS Billings.

The Ship handler of the year award is given to Surface Warfare Officers who demonstrate superior performance while standing Officer of The Deck Underway onboard the Navy’s newest platform, the Freedom-class Littoral Combat Ship.

Hammond received his commission from The University of Cincinnati. His qualifications include Surface Warfare, Officer of the Deck, and Anti-terrorism Tactical Watch Officer. He was previously stationed onboard the Guided Missile Cruiser USS Normandy (CG 60).

Surface Warfare Officers are Naval officers whose training and primary duties focus on the operation of Navy ships at sea, leading Sailors and managing the various shipboard systems and programs. The SWO community offers a wide variety of assignments and duty stations across the world.

Hammond is currently the Navigator onboard the USS Billings crew and is responsible for the safe navigation of the ship. He is required to continuously plan ahead and ensure that the ship is maintaining track to meet all mission requirements underway. He is directly involved with qualifying bridge team members who operate and maintain the navigational equipment as well as ensuring that the ship is in compliance with the Navigational Rules of the Road.

When asked what his favorite thing is about being and LCS Warrior ship, Hammond answered, “Having the unique opportunity to drive such an impressive warship.”

Due to the complexity of the systems and mission capabilities of the LCS platform, all of the personnel stationed onboard the Billings spend roughly two years of training and gaining experience through simulators.

LCS is a highly maneuverable, lethal and adaptable ship is designed to support focused mine countermeasures, anti-submarine warfare, and surface warfare missions. LCS integrates new technology and capability to affordably support current and future mission capability from deep water to the littorals.

Information from the Navy Office Of Community Outreach