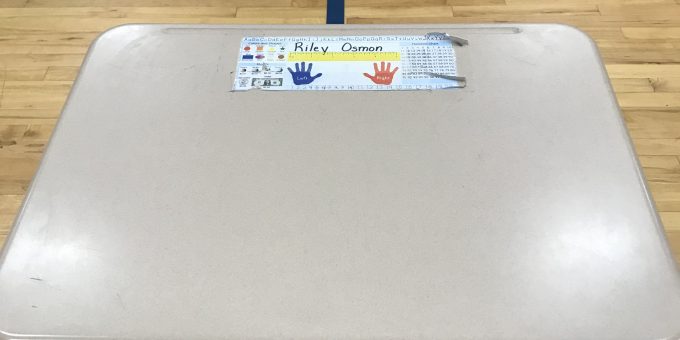 (SPRINGVILLE) – The Springville community came together for a Prayer Rally for Riley Osmon on Saturday night. Riley is a second-grader at Springville Elementary School.

His parents are Trent and Karrie Osmon.

Teachers and former teachers from Springville Elementary organized the Rally to help support Riley and his parents as he faces cancer treatment in Seattle, Washington.

In just four hours of a Facebook post announcing the prayer vigil, several classmates, friends, and community members came and gathered in the Springville gymnasium.

His desk and shirt sat in the middle of the gymnasium as the community sat on the bleachers, listening to comments by Springville Principal John Hudson, and Timothy Day who read the scripture of comfort for those attending.

“Riley came to Springville about the same time I did. He was sick and facing leukemia before he even started kindergarten, and I always saw him wearing a mask due to his illness,” said Principal John Hudson. Riley was diagnosed with leukemia when he was just two years of age. “Riley is a very special kid; always smiling, polite and an all-around good student.”

According to his parents, this is the last step as far as medicine for their child. He was diagnosed and sent to Riley. Because of the type of cancer he has he was sent to Philadelphia for treatment. Riley has faced many hospitals stays throughout his childhood.

Around the first of February, Riley ended up in Seattle, Washington for treatment and this is the end of the line as far as medicine. His treatment of CART-T therapy and other treatments to help with side effects and other complications are taking its toll on his small body.

Tim Day used scriptures to encourage and comfort those attending and to look to God for strength, guidance and most of all healing for Riley. Day read from Job Chapter 5, Isaiah Chapter 43, and finally Romans Chapter 8.

The community formed a large circle around Riley’s desk with bowed heads, children clinching to their parent’s hand, and tears softly running down their cheeks as they sent up prayers for the healing of Riley.

A few songs were then sung and the crowd left the gymnasium.

“The family is a good family, and Riley is a well-behaved child,” stated Jamie Day. “I told his father that I wanted Riley in my class. He was just that special of a student.”

Karrie Osmon is an employee of Springville Elementary. Several years ago the school held a fundraiser for Riley raising more $25,000.

Prayers continue around the clock seeking healing and comfort for Riley and his family.