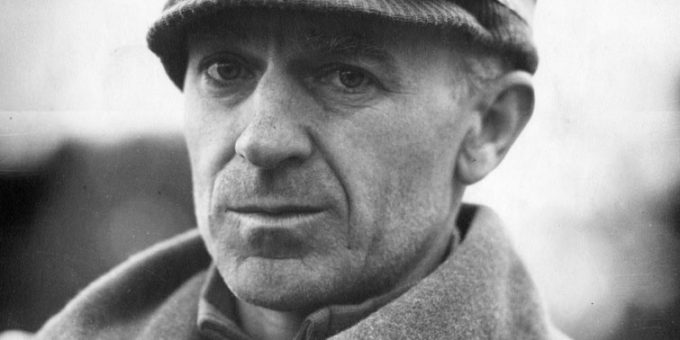 (BLOOMINGTON) – Nearly 75 years after his death, famed World War II
correspondent Ernie Pyle remains one of the most accomplished and beloved journalists in American history.

The Pulitzer Prize-winning columnist is the subject of a new documentary
premiering March 3 at 8 p.m. on WTIU Public Television and Facebook Live
(facebook.com/wtiupublictv).

Ernie Pyle: Life in the Trenches examines the external and internal battles of Pyle’s life, from his coverage of soldiers fighting on the European and Pacific fronts of World War II to his struggles with alcoholism, depression, and a troubled marriage.

The film follows Pyle from his beginnings as a cub reporter in northern Indiana to his travels across the US covering the Great Depression, and finally, to his firsthand reports from the foxholes alongside American troops during World War II.

At the height of his popularity during World War II, 40 million people read Pyle’s dispatches from the frontlines of World War II, often told from the perspective of the common US soldier. The documentary reveals that through some of the darkest chapters in America’s history, the voice of Ernie Pyle became the voice of the American people – a voice of promise, grit, and determination.

Ernie Pyle: Life in the Trenches is narrated by Emmy award-winning journalist and former CBS News anchor Dan Rather. Actor Jonathan Banks – from TV series Breaking Bad and Better Call Saul – gives voice to Ernie Pyle and his most acclaimed writings and personal correspondence to his closest friends and family. The program also includes notable interviews with the late Walter Cronkite and Andy Rooney, as well as a number of World War II veterans, contemporary journalists, and historians.

Learn more about the program at wtiu.org/erniepyle. Following the premiere on WTIU and Facebook Live, Ernie Pyle: Life in the Trenches will be available to watch on this website from March 4 through April 4. DVD and BluRay copies of the program will be available for the public to purchase starting in September 2020 from http://shopwtiu.org.

Ernie Pyle: Life in the Trenches is made possible with support from the Allen Whitehill Clowes Charitable Foundation, the IU Office of the Bicentennial, and the Ernie Pyle Documentary Fund.