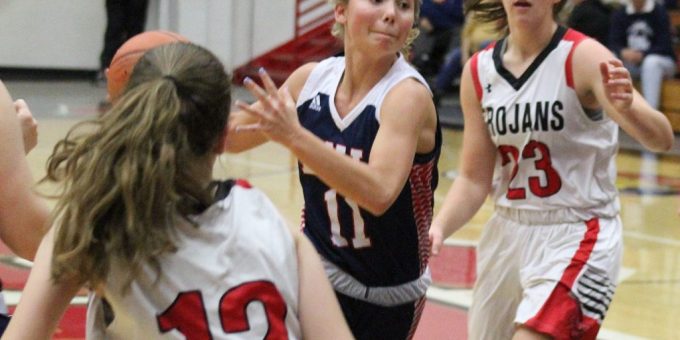 BEDFORD – Where is the hot spot in St. Leon, Indiana, population (according to the 2010 census) 678? When celebrating the first girls basketball sectional in 28 years, the choices were few but the venue didn’t really matter. East Central finally brought home a trophy and some championship net.

After seven straight quality seasons, each with 16-plus victories and nothing to show for all the success, the Trojans were rewarded. They are now members of Class 4A’s Sweet Sixteen, and it’s sweet indeed.

The next step is truly uncharted territory. East Central (22-5) will chase its first regional crown in program history, facing surprising Franklin Central (15-11) in the opening game at Columbus North on Saturday morning. That winner will meet either No.15 Bedford North Lawrence (19-5) or Evansville North (20-5) in the championship that night.

“It’s a culmination of everything we’ve worked for,” said Moore, now in his 11th season. “We just kept swinging, kept working. So now we have the opportunity to play for a regional, which would be a true highlight.”

East Central has won 10 straight, its last loss coming to BNL in early January. From that point, the Trojans have been unstoppable, winning every game in the current streak by double digits. They have one of the top freshmen in Southern Indiana in 6-0 forward Josie Trabel (15.8 points, 6.1 rebounds) and veteran guard in Brilan McCory (10.8 points, 4.2 assists), who has signed to play with Urbana University in Ohio.

“Josie is a great kid who has worked really hard,” Moore said. “She’s a match-up problem with her ball skills, with her ability to face up and go around people, or her ability to go in the post. And she has a lot of room to grow.”

East Central’s next challenge is stopping one of the best individual players in the state.

Senior star Rachel Loobie, an All-Star candidate headed to Central Michigan, is a flash for the Flashes. She averages 20.9 points and 11.5 rebounds, demanding constant attention.

“She’s had to do everything for us,” Franklin Central coach Vince Cerbone, who formerly coached at Martinsville, said while comparing his superstar to former BNL Miss Basketball Jorie Allen. “And she has. She’s had to bring the ball up and be a point guard, she’s a big presence (at 6-1) in the paint.”

Franklin Central was overlooked by many. First, the Flashes lost sophomore point guard Rayah Kincer (the second-leading scorer at 10.6) after 12 games with torn ligaments in her elbow. Second, they had lost four straight games heading into the sectional. So much for the momentum theory.

The Flashes got a big boost with the return of junior forward Madison Weaver (out since Dec. 21) just in time for the sectional. Then they avenged a regular-season loss to favorite Center Grove with a tense 36-32 victory in the final.

“We stuck with the idea that our schedule was difficult, that we were prepared for the tournament,” Cerbone said. “The kids saw the bigger picture. We just kept getting better.”

So who advances? The newcomer or the upstart? The squad or the superstar? Defense will determine that. East Central hasn’t allowed more than 40 points during the winning streak.

“We’ll have our hands full,” Cerbone said. “We’re expecting something out of the ordinary against Rachel, and they’ve got six kids who can score and attack the basket. We can’t let them control the tempo entirely, because they’re difficult to play against from behind.”

Last meeting: This is the first postseason meeting between the schools.

Game notes: The winner will face either No.15 BNL (19-5) or Evansville North (20-5) in the regional final. East Central has never won a regional, Franklin Central won its last regional in 1988.