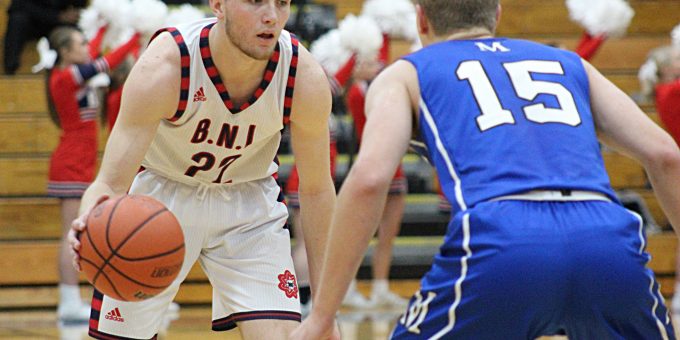 BEDFORD – An ancient series will be renewed when Bedford North Lawrence bids farewell to its second-generation son during an emotional Senior Night.

With seniors Brayton Bailey and Zach Sasser set for their final appearances on their home floor, Class A No.4 Loogootee will make its first visit to BNL Fieldhouse since the 1982-83 campaign. Those were days of Butcher and Bush, future Hall of Famers on the sideline.

These are the days of Bailey and Wildman, the present-day stars on the court for two of Southern Indiana’s hot teams. The Lions (15-3 and ranked No.4 in Class A) will bring a seven-game winning streak to the clash on Tuesday, while BNL (12-8) is riding the momentum of a five-game run.

Add the emotion of the senior celebration, with Bailey poised to become the second-leading scorer in program history, and the stage is set for an electric atmosphere.

Most of the attention will be on Bailey, both from a Loogootee perspective – he’s averaging 20.2 points, 7.8 rebounds and 5.4 assists – and from the BNL standpoint as he needs 12 points to pass Kent Moutardier (1,469 career points) to put the family name in the first (Damon with a state record 3,134) and second spots on the all-time list.

His task, and that of Sasser as he makes his third start of the year, will be controlling the overflow of emotions as he walks on the court bearing his father’s name for the final time in competition. He’s probably more concerned about keeping the winning streak alive.

“It’s definitely going to be sad, the last time to play on that court, on my Dad’s court,” Bailey said. “It will take a couple of days to hit me.”

BNL has played its best of late, especially on the defensive end. Only one opponent in the last five has scored more than 52.

“We’ve really turned it around,” Bailey said. “We’re heading in a good direction.”

The Lions have also reversed fortunes. Last season, they were embroiled in controversy as former coach Kent Chezem was placed on administrative following an incident at Mitchell. After Loogootee finished 9-15, he resigned.

The Lions will feature junior guard Jordan Wildman (14.6 points), although his status is questionable after he missed last week’s game against Orleans. Loogootee will also get scoring punch from 6-6 junior Silas Bauer (12.9 points, 8.2 boards).

“They’re good, they’re solid,” Hein said. “They have some size. Ryan does a great job with them.”

BNL and Loogootee last met in the 1988 semistate at Terre Haute. The Stars won that one 72-63 as Damon Bailey scored 30 points.

Last meeting: BNL prevailed 72-63 in the semistate semifinal at Terre Haute in 1988.

Game notes: Loogootee leads the series 6-5. Loogootee’ s current seven-game winning streak is its longest since the Lions started 2012-13 with a 7-0 mark.