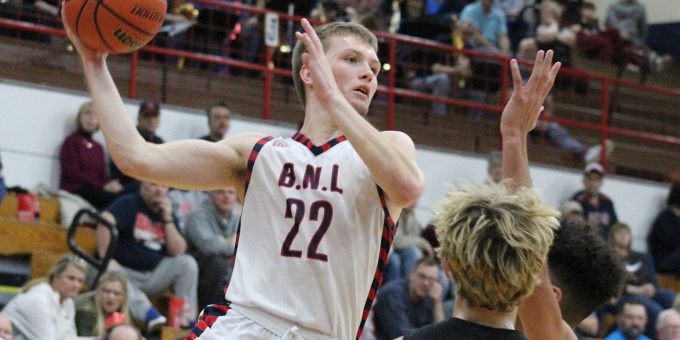 BEDFORD – The circle of basketball life will complete another circuit on Saturday afternoon.

Exactly 31 years ago, which does not seem possible, Bedford North Lawrence basketball was at its zenith, locked in legendary battles with the most worthy foe. Two Mr. Basketballs dueled, once in the regular season and once during an epic regional battle in Seymour. Now, the next generation of the Bailey-Graham clashes will take place.

In no way can this meeting come close to the standard set by the famous fathers. Floyd Central won the regular-season war 67-65 at Floyd, then edged the Stars 76-72 in overtime in the regional opener. The images – Graham twirling around screens to launch that deadly jumper, twisting in midair to square and launch, while Bailey scored 37 points despite a broken finger on his left hand – are everlasting for the basketball junkies. The Highlanders went on to the state finals. BNL would win the state championship the next season.

Fast forward back to present day. Bailey the Younger and the Stars are hot with four straight wins, with Bailey playing magnificently while leading BNL in scoring, rebounding and assists. Cade Graham is averaging 17.3 points for the Tigers, with Jace running the offense as the point guard. Neither should be measured against their fathers.

“They are different kinds of players,” Memorial coach Rick Wilgus said. “We rely on Cade (a 6-2 guard) to score, Jace for ballhandling and defense. Since they came into our program, I have had the goal to keep from the father-son comparison, mainly because we are dealing with different eras of players. Players today are different than past players.”

Memorial has struggled of late, losing four of its last five. In addition to Graham, they also feature junior Justin Waiz (12.9 points) and senior Connor Quick.

“Cade is a nice player,” BNL coach Jeff Hein said. “He’s an inside-out kid who will post up, then step out to shoot over the top. Obviously he’s their main guy, and he’s stepped into that role, with defenses focusing on him, and still averaging 18.”

BNL’s concern is maintaining momentum and sharpness. The Stars have matched their longest winning streak of the season.

“It’d be nice to keep playing the way we’re playing,” Hein said. “We need to protect our home turf, be difficult to beat at home. We have two games left here, and we really need to take both of those.”

As far as a renewal of the Damon-Pat shootouts? Perhaps, 30 years later, in a game of horse. Wilgus indicated there would be far more that do not remember the dads. That’s certainly arguable. But for this day, it’s a chance to revisit the past and see the present.