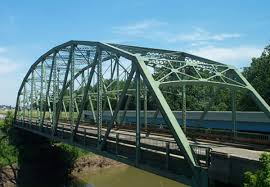 (EVANSVILLE) — An 80-year-old bridge in southwestern Indiana is now closed indefinitely after inspectors found that it sustained major damage when a truck carrying an oversized load struck it last month.

Inspectors who then used a climbing team, drones, and other specialized equipment to examine the bridge found major damage to nearly all of its vertical components and weight-bearing connections, The Evansville Courier & Press reported.

INDOT said the bridge is now closed indefinitely, and “early estimates from the bridge engineering team indicate it could take more than a year to repair the bridge.” The agency has enlisted the services of a consultant to review the reports and determine the next steps.

State Police Sgt. Todd Ringle said the bridge was damaged when a truck carrying a large electric motor struck its frame after an escort driver in another vehicle tried unsuccessfully to warn the truck driver that his vehicle wouldn’t fit under the bridge.

The truck driver was ticketed for expired registration and for breaking the terms of the vehicle’s over-sized permit.