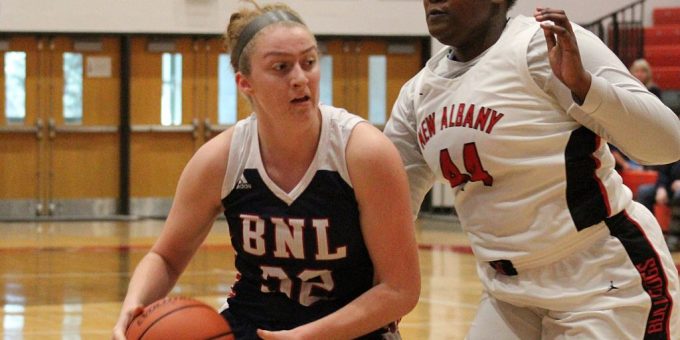 BEDFORD – One step closer, two steps back to the throne. Bedford North Lawrence certainly knows the necessary footwork as it ascends the staircase toward another sectional championship.

After successfully navigating past the first obstacle in their title defense, the No.15 Stars face another rematch as they prepare to clash with New Albany in the Class 4A semifinal at Jennings County on Friday night.

The Stars, seeking their ninth consecutive sectional title, are overwhelming favorites, to claim this crown and advance deep into the state tournament. They have offensive firepower, and they have renewed defensive tenacity that came to bear during the opening-round victory over Seymour.

BNL silenced the Owls, limiting them to a season low in points during a 59-26 runaway. Madison Webb and Irye Gomez scored 15 points each, and Webb continued her usual postseason double-double production with 11 rebounds. That’s 7 straight tournament games, and 10 of the last 11, with double-digit scoring from the 6-3 senior in the post.

Another streak of note- in addition to BNL’s 25 straight sectional wins – is the fact nobody has cracked 35 points in the last four sectional games. That wins a lot of tournaments, and BNL coach Jeff Allen expects more of the same.

“I thought we played with poise, played hard and executed,” Allen said of the win over Seymour. “Defensively, I’m really happy they’re taking ownership of that. We’re really playing well.”

BNL already owns a 65-36 win over the Bulldogs, who were guilty of 21 turnovers. If New Albany can fix that issue, it has a weapon in the post in senior center Naria Reed, who scored 16 points against the Stars in the regular-season skirmish at New Albany. She will demand attention.

“We have to have an idea of what she’s doing,” Allen said. “She’s big and powerful, left-handed, and a really good post player. We need to pressure the ball, make it hard to get it to her, take away angles and make things difficult.”

BNL’s recent defensive stance has started in the backcourt, with tremendous in-your-face pressure and quick traps. New Albany will see more of that.

“That’s a good model to follow,” Allen said, “trying to speed them up and disrupt the half-court game.”

Chloe McKnight had 18 points and 8 rebounds against New Albany, while Gomez totaled 18 points. They also rank 1-2 in BNL’s team scoring, so they will be a focal point for the Bulldogs.

If BNL has any current points of emphasis, it’s the minor issue of making shots. The Stars were not functioning with their usual crispness on that end in the opening round. Hey, even the best can suffer through an off night.

New Albany is chasing its first sectional title since 2002.

In the other semifinal, the Red Devils already holds a 42-41 win over the Panthers, but that was played on Nov. 26 in Johnson Arena. Since then, Jeffersonville has lost its offensive leaders (Kelsie James and All-State candidate Nan Garcia) with season-ending knee injuries. Jeffersonville, which advanced with a 49-38 win over Floyd Central, will have to contain JC scoring threat Addyson Kent.

Last meeting: On Dec. 7 at New Albany, the Stars cruised to a 65-36 triumph. Chloe McKnight had 18 points and 8 rebounds while Irye Gomez totaled 18 points for BNL. Naria Reed had 16 points and Layne Burke grabbed 12 rebounds for the Bulldogs.

Game notes: The winner will face either Jeffersonville (14-10) or Jennings County (9-14) in the championship game on Saturday night. The Stars own a 25-game sectional winning streak.