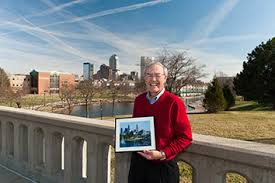 (INDIANAPOLIS) – A federal jury verdict in an Indiana copyright case is having a ripple effect across the country.

Richard Bell, an Indianapolis attorney who has spent a decade claiming he owns the copyright to a now-infamous Indianapolis skyline photo, was flatly denied entry of a default judgment by the United States District Court of Oregon, finding that a recent Indiana verdict blocked Bell from actually proving he owned the skyline photo.

The Oregon court determined that a federal jury verdict handed down in September 2019 by the Southern District of Indiana, where Indianapolis-based Carmen Commercial Real Estate successfully proved Bell did not hold a valid copyright to the photo, has precluded Bell from relitigating whether he owns the copyright interest in the skyline photograph.

“The issue-preclusion doctrine prevents a person that has lost an issue in one suit from getting a second bite at the apple in another suit,” said Paul B. Overhauser, the attorney that successfully challenged Bell’s claim of ownership in the Indiana suit and publisher of the Indiana Intellectual Property News Blog. “When you lose, you lose. Our courts are already congested, and we shouldn’t give losers a chance to go after more innocent victims.”

According to documents from the Indianapolis trial, when Bell began going after accused infringers in 2011, he would settle for $200. But his settlement demands steadily rose over the years to $15,000. The reason Bell used to justify his increasing demands was that he had obtained a $150,000 judgment against a Florida company.  But he did not tell his victims that it was just a “default” judgment because the company had been dissolved months earlier.

Bell was attempting a similar maneuver with a default judgment in the recent Oregon case.

“I’m glad to see that our investment of time and legal fees to win our case in Indiana is being recognized by other judges,” said Chris Carmen, president of Carmen Commercial Real Estate. “Now that Mr. Bell has been smacked down a second time, maybe he will see the light and bring his campaign of baseless litigation to an end.”

Due to the Indiana jury verdict, Bell also could be on the hook for potentially $20 million in legal fees from other cases Bell has filed.

Bell has asked the Indiana court for a new trial in the Carmen Commercial case. The court’s decision is pending.