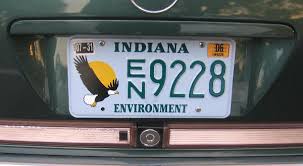 Each year, Hoosiers pay to renew their vehicle registrations and receive the decals from the B.M.V to place on their license plates.

The production and postage to mail these decals cost taxpayers more than $6 million dollars annually. However, the state only collects about $300,000 in fines from those driving with expired plates each year.

Under the bill, the B.M.V. would be tasked with the responsibility of figuring out how they could make the transition to electronic vehicle registration by August 1, 2020.

“The world is moving more and more toward electronic systems,” said State Rep. Doug Gutwein’s (R-Francesville), who authored the bill. “In Indiana, we already allow for liens and titles to be handled electronically and soon, Hoosiers could be able to carry their driver’s licenses on their mobile devices. Transitioning to an electronic system for registrations would not only make it easier for Hoosiers, but would also save taxpayers millions of dollars in the process.”

According to Rep. Gutwein, police do not need these stickers to see if a plate is expired. Rather, they can get this information from running the plate in their computer system. He said three other states have already eliminated vehicle registration stickers and moved to electronic systems.