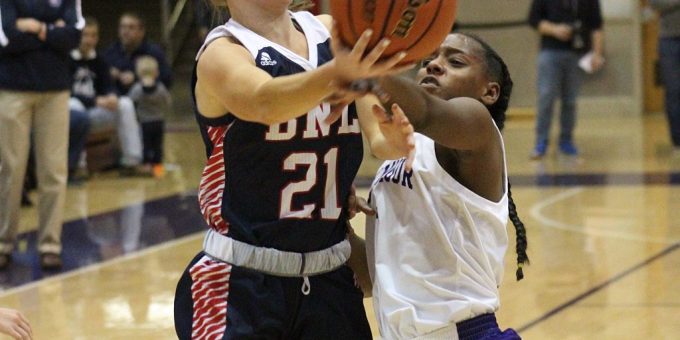 BEDFORD – Bedford North Lawrence, now the prohibitive favorite, will begin defense of its Class 4A sectional crown against Seymour in the opening game at Jennings County.

On the opposite side of the bracket, Jeffersonville (13-9) will clash with Floyd Central (5-15) in the second game on Feb. 4, with that victor to face Jennings County (7-14) in the second semifinal. The championship game is set for Feb. 8.

BNL, the eight-time defending champion, shared the Hoosier Hills Conference title with the Red Devils during the regular season. Jeffersonville rallied to conquer the Stars 56-53 on Nov. 23, but key injuries to top players Kelsie James and All-State candidate Nan Garcia decimated the Devils, who have gone 2-7 since the Garcia knee injury.

Thus, the favorite label, with its pressure and attention, shifted.

“I don’t think we’ve ever won a sectional because we got a good draw,” BNL coach Jeff Allen said. “It has to do with how you’re playing. That’s the big thing for us. We feel like we’re playing really well.

”We’ve handled the pressure of expecting to win all year. We’ve gotten better than we were in November, as far as facing that and expecting to win. We’ve been down that road before. We’ll focus on us rather than everyone saying we’re the favorite. We’ll block that out.”

The Stars, chasing the 29th sectional title (the second most in state history behind Rushville’s 31) in program history, already own a 59-49 triumph over the Owls on Dec. 12.

“It’s conference teams so we don’t overlook anyone,” Allen said. “Everyone knows us well and plays us tough. We’ll take what we got. We’ll try to be ready for anything.

“They shot the ball well against us (hitting a whopping 11 3-pointers). When you’re on the road and they shoot the ball well, you can be in for a battle. Basketball is about putting the ball in the basket. They made it difficult.”

Chloe McKnight paced the Stars that night with 25 points while Karsyn Norman added 13. Grace Schrader had 14 points and Grace Meyer 13 for the Owls, who were plagued by 27 turnovers.

“We’ve been up and down,” Seymour coach Jason Longmeier said. “We’ve gotten better in some areas, some areas we need to improve. We need to eliminate turnovers. Those put us in some bad spots.”

Seymour will face BNL for the fourth time in the last eight postseason tournaments. The Owls fell to the Stars in the first round in 2017 and in the semifinal rounds (after drawing a bye) in both 2015 and 2013.

“I sure would like to see the IHSAA shake the ping-pong balls up a little better,” Longmeier said. “It’s a going to be a tough road to hoe. We played well the first time at our place, but it will be a challenge.”

In the other first-round matchup, Jeffersonville stopped Floyd Central 59-40 on Dec. 7.

The sectional champion will advance to the two-game regional at Columbus North, along with winners from sectionals at Bloomington South, Center Grove and Evansville Harrison, on Feb. 15.