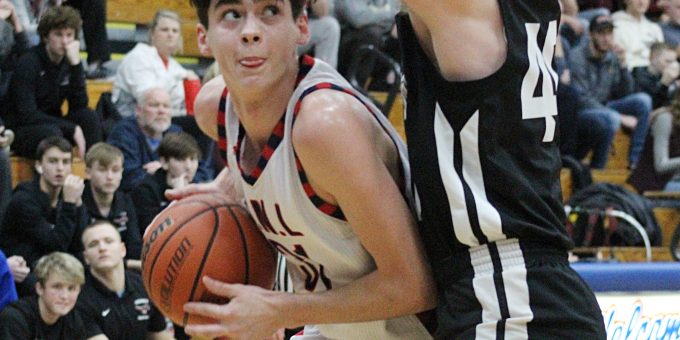 BEDFORD – The first three games of his turbulent junior season, Ben Cosner felt like he was dribbling and shooting an oblong ball. And he lost his mojo, leaking confidence like an old truck, lost his starting spot. Head down and attitude dragging the dusty floor.

With Bedford North Lawrence reduced in depth, needing an offensive thrust from one able to carry a piercing sword, Cosner earned a king’s ransom and slayed the inner dragon, scoring a career-high 18 points as the Stars capped an impressive weekend with a second, and high-quality, victory.

The Stars, with all five starters playing 32 minutes, were iron men with iron resolve and purpose during a 60-52 triumph over surging Edgewood on Saturday night. Brayton Bailey was the catalyst with 17 points, 11 rebounds and 7 assists, while Jackson Miracle totaled 13 points, powering BNL (9-8) to a victory over a team that had not lost since it became whole again.

This was what first-year BNL coach Jeff Hein envisioned when he asked for more contributions. Yes, Bailey can explode when necessary, but this was a win of solidarity and smoothness.

“We didn’t care where the points came from, we just wanted to win,” Hein said. “They did what it took to win as a team. They looked like a team.”

What did this look like? Cosner, who hit one shot those forgettable first three outings, drilled three first-half 3-pointers. Miracle was a flopping-hair layup machine, hitting all six from point-blank range. Bailey carried the shield, deflecting Edgewood’s counters.

“You talk about Bailey’s ability to drive and score, so you come in with the mindset to make someone other than him beat you,” Edgewood coach Matt Wadsworth said. “Obviously we’re not the first team to walk in here with that mindset. To his credit, he did a good job distributing the ball to his teammates. The 18 points from Cosner were huge, the three 3s he hit stand out.”

Cosner walked in with an aggressive mentality. That old kid, who questioned himself and his desire just a month ago, is gone. The new kid made a difference.

“I lost a bit of my confidence at the beginning, had a few bad games to start off,” Cosner said. “My teammates kind of brought me back and helped me get there, kept my head up.

“I feel good, but I’m mainly just happy for my team. I feel like our confidence has gone up after this weekend. We’re playing a lot better, finding open looks, we’re getting everyone open and getting everyone the ball.”

Miracle was the first open man, scoring twice as the Stars sprinted to a 7-2 lead. Cosner was next, dropping two treys in the second quarter as BNL shot 80 percent in that frame and rolled to a 7-point lead before Sam Kido’s late trey cut the margin to 30-26 at the half.

In the fourth, after the Mustangs (9-7) drew within one, freshman Colten Leach scored twice (off a Bailey pass and off an offensive rebound) as BNL extended to 55-46, and Bailey was the closer. Cosner, Bailey and Miracle combined to hit 18 of 23 shots. Wow.

“That’s great balance,” Hein said. “Ben had a heck of a game, played with a lot of confidence on the offensive end. He’s earned his stripes here and he’s playing well, deserves everything he gets. He’s handled things the right way and I’m proud of the way he’s grown as a player.”

Trevor Taylor, whose return from suspension sparked the five-game Edgewood winning streak, had 22 points, 16 in the first half, 12 in the second quarter as BNL searched for some stoppage. Parker Harrington hit four treys, including a couple of step-back bombs, for 12, and Coleman Sater added 10. Edgewood had only 4 turnovers, usually a key barometer for victory.

“Tonight was a game we needed to be 95 percent execution,” Wadsworth said. “There were several possessions where we cut the lead to one, and needed a defensive stop, but we didn’t play with enough urgency in those moments.”

Hein’s magic number is 55. Keep an opponent to that total or below and the odds of winning skyrocket. All nine wins this season have that in common.

“I like to watch defensive basketball. That’s just me,” Hein said. “I’ve seen it this weekend.”

BNL will need that, because the tasks get tougher. The Stars will visit Hoosier Hills Conference leader Jeffersonville on Friday.