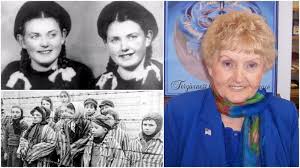 (INDIANAPOLIS) – The impact of Eva Kor’s life is impossible to measure in words, and there is no question designating January 27, 2020, as Eva Kor Education Day is a tribute to her memory.  Her willingness to share the story of the horrific experiences in Auschwitz and still be able to provide the grace of forgiveness speak volumes to her character. And fitting as well, this January 27th is the 75th anniversary of the liberation of Auschwitz.

For anyone who ever had the fortune of listening to Eva tell her story in person, it was an opportunity not to be missed.  Well over 150 offenders at the Pendleton Correctional Facility did hear Eva’s story, in person, behind the prison walls, this past June 12th of 2019, a mere three weeks before her death on July 4th.  This engagement was filmed by the Indiana Department of Correction, and now, in partnership with the CANDLES Holocaust Museum & Education Center the trailer of the video and the full presentation may be viewed on the IDOC YouTube Channel, as linked below.

“Eva Kor was one of Indiana’s gems. I’m grateful the Indiana Department of Correction was able to memorialize her message of hope, salvation and forgiveness during her visit to the Pendleton Correctional Facility,” Gov. Eric J. Holcomb said. “Her grace and compassion for all is worthy of emulation in our own lives. What a blessing for Indiana to have become her adopted home.”

The Director of the Candles Holocaust Museum & Education Center, Ms. Leah Simpson, commented, “CANDLES Holocaust Museum and Education Center has served the community for 25 years. We will continue to move forward with sharing the story of the Holocaust and honoring the legacy of Eva Kor.”  Simpson continued, “Eva selflessly shared her story all around the world with the hope that she could sow seeds of peace and forgiveness and rid the world of hatred and violence. She was a voice for the victims, and the impact she had on the world is irreplaceable. We will continue her work in her stead.”

CANDLES, an acronym for Children of Auschwitz Nazi Deadly Lab Experiments Survivors, was founded in 1984 as a 501(c)(3) nonprofit organization by Eva Mozes Kor with help from her twin sister, Miriam Mozes Zieger, to launch an effort to locate other surviving Mengele Twins. In 1995, following the death of Miriam, Eva opened the CANDLES Holocaust Museum and Education Center in Terre Haute, Indiana. CANDLES shines a light on the story of the Holocaust and Eva Kor to create an empowered community of critical thinkers who will illuminate the world with hope, healing, respect, and responsibility.