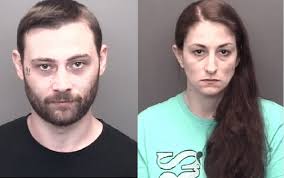 (EVANSVILLE) – An Evansville couple was arrested Thursday in the beating death of a 4-month-old infant.

The child’s mother, 32-year-old Chelsea Marksberry, was arrested on a charge of neglect-reckless supervision in the death of a child.

Marksberry told 911 dispatchers the baby’s father claimed the infant fell off the bed earlier Wednesday but that he seemed to be fine when she got home from work.

She told police the baby took a bottle that night and slept through the night. When she woke up Thursday, she said the baby wasn’t breathing.

However, EPD spokesman Sgt. Nick Winsett said in a Thursday afternoon news conference that other officers and workers at the scene described it as “probably the worst infant death they’ve ever seen. “

“It was pretty bad” He added. “I’ve seen some pictures and it’s really graphic. From the photos it was pretty obvious he was severely abused.”

The Vanderburgh County Coroner says they observed severe facial injuries, severe burns marks on his face and chest area, and what appeared to be cigarette burn marks on the child’s feet and hands. The baby died from blunt force trauma.

They found him around 2 p.m. Friday after a person called police saying Bengert asked the caller for a ride in the area of Fares Avenue and Maxwell.

Police found Bengert near the railroad tracks and he was arrested.