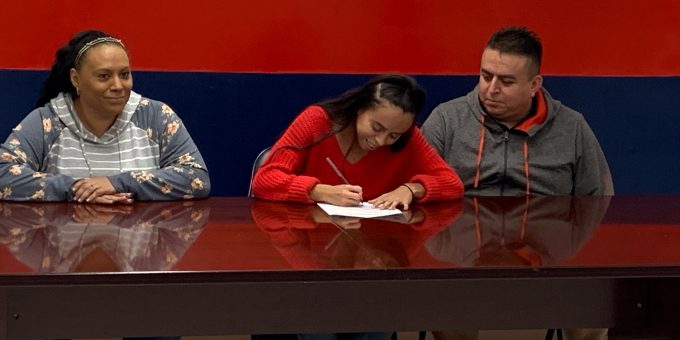 (BEDFORD) – The beautiful game caught Jennifer Ramirez’s eye at age 5, and she’s been in love ever since. Her passion has been rewarded.

Ramirez, Bedford North Lawrence’s leading scorer the past two seasons, signed with Hutchinson Community College on Wednesday afternoon. All those days of watching soccer and practicing in the back yard with her father Evaristo paid off with the opportunity to continue her career on the next level.

She won’t be in Indiana anymore, Toto, as Hutchinson is a junior college program (a member of the KJCCC and NJCAA) dead in the middle of Kansas, a long kick away from home. But she’s ready for the challenge.

”I’m definitely going to train more to earn my spot, because I do not want to be a bench warmer,” Ramirez said. “I’ll have to talk to a lot of people to get comfortable, to get to know my team, my coaches and teachers.”

Hutchinson went 12-4 last season under head coach Sammy Lane, and one of those victories was over a program that was recruiting Ramirez. When she noticed that result, she switched her focus and landed with the Blue Dragons.

Ramirez paced the Stars with 13 goals and 6 assists as a senior, earning All-Hoosier Hills Conference honors, and she totaled 9 goals as a junior. She had this success despite drawing constant double-team attention as BNL’s main threat.

“She’s one of the hardest workers I’ve ever seen,” BNL coach D.J. West said. “If I had a whole team of her, we’re be pretty dang good. Hopefully that’s an example she can set. If you work hard. Your dreams will come true.

“Jennifer put in so much work. It’s all to her and her family. I’m so happy for them. From Day 1, she told me she wanted to play college soccer.”

“I’m super excited,” she said. “My dad made it fun all the time and pushed me to be the best. I just realized I wanted to keep doing it for as long as I can.”