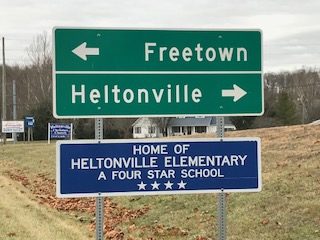 The reason behind the recommendations over the years was due to enrollment numbers, building conditions, and the costs associated with operating those facilities.

Over this time, there has been intense public pressure to keep the three schools open.

“Let’s face it; the pressure to close Fayetteville, Heltonville, and Springville began back in 1975 when they consolidated the high schools,” said Bruce Reeves, a Fayetteville resident who opposes consolidation.

In 2017, a facility study was conducted. That study recommended the school corporation consider changes to remain financially solvent in the future. School board members took the study under advisement and nothing was addressed.

The latest push at closing schools came in August 2019, with the formation of a Visionary Committee to look at three plans presented by NLCS Superintendent Dr. Ty Mungle and his staff.

A fourth plan was released last Saturday, related to the public’s concern about keeping a school on the west side of the district. Needmore School was chosen as that location.

However, the public is still not pleased.

“Once these students go into a larger school, they become a number. The students in the smaller schools… teachers and staff… they know your name and family personally,” says Neysa Mitchell, of Fayetteville.

Many residents are still deeply concerned that officials are moving too fast.

“You do not have to look very far to see what consolidation does to a community. Look at Huron, Tunnelton, and Williams, and what these communities look like now,” said Bruce Reeves.

“Our community (Heltonville) is 20 minutes from Bedford, 20 minutes from Bloomington, 30 minutes from Seymour. Our school is located in a good area, and will eventually grow. We already have a lot of babies in our community. The $1.3 million in savings will only be a small benefit. Once they close all these schools, this same school board will be asking the community to support them in raising taxes, building another school, or some other project that any of these tax savings presented will not save the taxpayers any money in the long run,” said Faubion.

Residents in Perry Township have reached out to Eastern Greene School officials to find other options for their families if Springville Elementary is closed.

“We have received several calls from residents in the Springville area interested in our school corporation. At this time they are reaching out to us, and we are not reaching out to them. We are taking a ‘wait and see’ approach until the North Lawrence Community Schools makes a final decision on consolidation,” said Eastern Greene Community Schools Superintendent Trent Provo. “We would like to encourage everyone to contact us if they have any questions. A lot of information is out on social media but we prefer them to contact us directly at 812-825-5722.”

“Once the decision is made, we will have an open house for parents to view our facilities, and look over the classrooms. We will also evaluate whether a cost versus benefit of adding a bus route into the North Lawrence Community School District is feasible,” Provo added.

Despite strong opposition to the consolidation plan, many support the idea that something has to be done. They believe consolidation will improve education programs and activities.

Dr. Ty Mungle will present this new plan to the school board on Monday.

An open session will also take place at 6:30 p.m. at the Administration Building located at 460 W Street in Bedford.