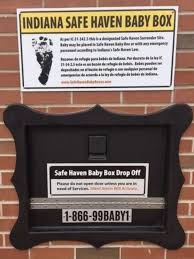 (COLUMBIA CITY) — Baby boxes that allow people to anonymously leave newborns at firehouses have been added in two more Indiana cities, giving the state nearly 20 of the potentially life-saving devices.

A baby box was dedicated Sunday at the New Haven Fire Station in the city that’s just east of Fort Wayne. Another baby box that was dedicated Monday at the Columbia City fire station, also in northeastern Indiana, became Indiana’s 19th baby box.

Safe Haven Baby Boxes founder Monica Kelsey, who was herself abandoned as an infant, said the effort to equip firehouses with the boxes aims to eliminate situations where babies are placed in danger by women or parents seeking to abandon their infants.

“Women want and need anonymity,” Kelsey, who is a firefighter and medic, told The Journal Gazette.

The baby boxes are containers with a door to the outside of a fire station building. When they’re opened, an alarm sounds to alert on-duty staff, nearby volunteers or emergency dispatchers that a child has been placed there. The boxes contain warming and cooling features and they lock after use.

The boxes are legal because Indiana is one of five states that have a Safe Haven law. That law allows a person to anonymously surrender a healthy baby 30 days old or younger at any hospital emergency room, police or fire station without fear of criminal prosecution.

Kelsey said Indiana had nine surrenders at baby boxes during 2019.