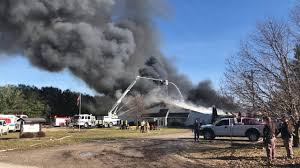 (ELNORA) – A fire destroyed a factory in Elnora on Christmas Eve.

Multiple fire departments responded to battle the blaze. Smoke could still be seen billowing out of the building around 1 p.m.

No one was hurt in the blaze.

Elnora Fire Chief Rob Dove says the fire is believed to have begun at the back of the business. Fire officials believe paint and other flammables resulted in the fire spreading. The State Fire Marshal has been called in to investigate the cause.

According to the company website, Basiloid founder Lloyd Hobson was founded in the era of World War II and incorporated in 1952. The company developed a “Lift-A-Pliance” lift truck attachment. The attachment is used in major companies around the world.