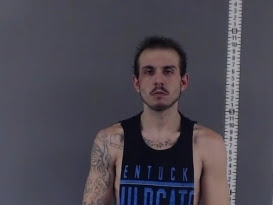 (WASHINGTON CO.) – It started with a dispatch to be on the lookout for a stolen vehicle. It ended with the arrest of a Kentucky man on several felony charges including possession of a stolen vehicle, drugs, and felony gun charges.

Around 7:40 a.m. this morning, Indiana State Police Radio dispatched information on a blue, 2001 Chevrolet Blazer that had just been reported stolen to the Salem Police Department.

The vehicle was reported stolen just minutes before the dispatch and was believed to still be in the area.

A short time later, Trooper Kyle Taylor observed the vehicle headed eastbound on State Road 56 just east of Salem. Trooper Taylor attempted to stop the vehicle; however, the driver refused to stop and attempted to flee.

Trooper Taylor gave pursuit, following the vehicle as it continued east on SR 56 before turning north on Elk Creek Road. The pursuit continued on county roads before the driver lost control turning north onto State Road 39 from Mill Road. The suspect went off the east side of the roadway and into a muddy ditch.

The driver, later identified as 25-year-old Austin T. Gayheart, of Viper Kentucky, fled on foot but was apprehended by Trooper Taylor.

Once in custody, Gayheart, a convicted felon, was found in possession of a loaded pistol as well as suspected methamphetamine, heroin, and marijuana.

Salem Police Officer James Moore said he would also be charging Gayheart with vehicle theft and conducting that part of the investigation.