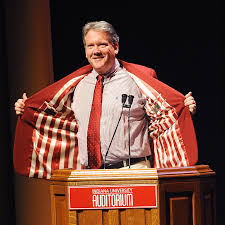 The Indiana University vice president and director of intercollegiate athletics said this will be his last year at IU. Glass will retire at the end of the academic year.

Glass, who was appointed athletic director at the start of 2009, has served in these roles for more than a decade.

“It’s an all-in, all-consuming role, and I’ve loved it, but I’m ready to step back and do something that keeps me closer to home with more time with my granddaughters and the rest of my family,” Glass said in a statement. “I’ll finish up the Bicentennial Year and give President McRobbie enough time to select a great successor.”

According to the university, Glass has been instrumental in raising money for IU’s athletic program. Those efforts led to the aforementioned improvements in facilities as well as conference championships for 23 teams and 195 individuals. IU also produced a National Team Championship and 28 individual National Champions.

“He (Glass) has done an outstanding job in all areas of his portfolio and IU is seeing levels of accomplishment academically and athletically by its student-athletes that rank with the best it has ever achieved,” IU President Michael McRobbie said in the release. “His legacy will be one of strong and competitive athletics programs and teams that play by the rules, a pervasive commitment to compliance and integrity, a commitment to excellent academic performance, record fund-raising and magnificent new or renovated facilities.”

The release said McRobbie will soon announce the members of the search committee to find Glass’ successor, but it was announced the committee will be chaired by IU’s Vice President for Government Relations and Economic Engagement, Bill Stephan, who was also in charge of the committee that appointed Glass.

“I feel like we’ve rebuilt IU Athletics both culturally and physically,” Glass said. “We have followed the rules. We are graduating our students at a record rate. Competitively, most of our programs are doing historically well, and the futures are bright for all of our sports.”

Academically, IU Athletics set or tied records for its Graduation Success Rate (GSR) for its athletes for seven consecutive years under Glass, with the current mark of 91%  significantly above the 77% GSR that IU had in 2011.

On the field, 23 IU teams and 195 individual players won conference championships since Glass became the athletic director, and facility expansions included the opening of the Terry Tallen Indiana Football Complex, Wilkinson Hall, the Pfau Course at Indiana University and a renovation of Simon Skjodt Assembly Hall.