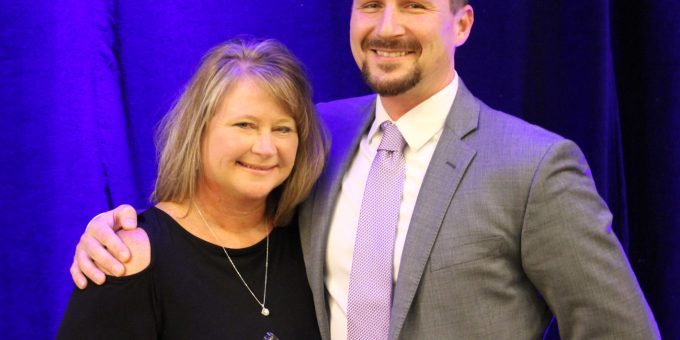 In all, seven award winners were selected by the IPAC Board of Directors and celebrated for their accomplishments during the 2019 awards ceremony.

The evening was highlighted with the presentation of the Eugene “Shine” Feller Award, the highest honor IPAC bestows. The Feller award, established in 2975, was named after former Harrison County Prosecutor Eugene Feller and is meant to award Indiana’s outstanding citizens who make a difference in the world of criminal justice. Previous winners have including governors, judges, Attorneys General and prosecutors.

Two lawmakers from the Indiana General Assembly were also honored for their role in creating legislation that protects victims of crime and helps law enforcement officers do their jobs more effectively.

Sen. Mark Messmer, R-Jasper, was selected as a recipient of the 2019 IPAC Legislative Excellence Award, in large part thanks to his work carrying Senate Enrolled Act 551 during the 2019 session. SEA 551 was deemed the Victims’ Rights bill and included several provisions that help those who have been impacted by a crime. Among other things, the bill allowed parents to seek a protective order against someone who is grooming their child for sexual activity, tightened penalties for strangulation and domestic battery, allowed witnesses to have a trained therapy dog or comfort items with them on the stand and better protects the identity of victims by removing the use of initials in police reports. Sen. Messmer was nominated by Washington County Prosecutor Dustin Houchin.

The other 2019 Legislative Excellence Award went to Sen. Michael Young, R-Indianapolis. Sen. Young was crucial for prosecutors during the most recent session thanks to his work on synthetic drug reform, closing loopholes in the state’s OWI statutes and drug dealing penalties. Sen. Young serves as Chair of the Committee on Corrections and Criminal Law, which reviews all bills impacting public safety that comes before the Senate. Sen. Young was nominated by Tippecanoe County Prosecutor Pat Harrington.

“It’s amazing how much of a difference one person can make,” Arp said of Allen’s impact. “He has changed the landscape of my county. Dealers are scared to be found in our community and users are having more success with treatment.”

Dr. Bill Smock, who works as the police surgeon for the Louisville Metro Police Department, also received the 2019 Law Enforcement Award. Dr. Smock was nominated by Allen County Prosecutor Karen Richards who thanked him for his invaluable help to both her office and prosecutors around the state and nation. Dr. Smock is a leading expert on strangulation and domestic violence and has done countless trainings for prosecutors and law enforcement over the years, making sure everyone is up to date on the latest advancements in the field.

“It is not an exaggeration to say that Dr. Smock has saved countless lives,” Richards said.

Tonia Sievers was presented with the 2019 Kathy Falkner Richey Award for outstanding service over the past 20 years as the Daviess County office administrator. The Richey Award is given to those who support prosecutors behind the scenes, making sure the day-to-day operations of the office go smoothly. She was nominated by Daviess County Prosecutor Dan Murrie.

The final award from Monday was the Outstanding Victims’ Advocate award, which went to Melinda Padgett, the Director of Advocacy Services in Madison County. Padgett has been in her current position since 2002 and has been instrumental in bringing on more advocates to the office. Her nominator, Madison County Prosecutor Rodney Cummings, said she also represents his office in several different capacities across the county, including the Madison County Trauma Team which she helped create.

“We are extremely happy with all nominations that we received this year and we enjoy the chance to honor those who work hand-in-hand with prosecutors on a daily basis,” IPAC Executive Director Chris Naylor said. “The awards ceremony is our chance to say ‘thank you’ and to recognize some very dedicated people who have made outstanding contributions to public safety in Indiana.”