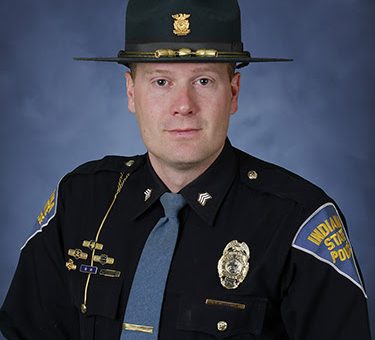 (SEYMOUR) – On Friday, at 3 p.m. Indiana State Police Sergeant Stephen Wheeles, was assisting another trooper on I-65 with the reconstruction of an accident that happened two days earlier. Wheeles then heard a call of an accident with possible injuries on State Road 11, north of Seymour, and started toward the accident.

The dispatcher reported a vehicle was in the water and that a woman was trapped inside.

When Sergeant Wheeles arrived on the scene, located at State Road 11 near County Road 800 East in Jackson County, he found a car partially submerged in water and sinking.

Sergeant Wheeles immediately went to the aid of the driver, 23-year-old Megan Fleetwood, from Jeffersonville, who was trapped in the vehicle. Sergeant Wheeles jumped into the water to rescue Fleetwood. Once in the water, Wheeles was given a hammer from another person at the scene and used it to bust out the back window of the car. He then pulled Fleetwood out of the vehicle and to safety.

Indiana State Police were assisted at the scene by Seymour Police and Fire Departments and EMS.