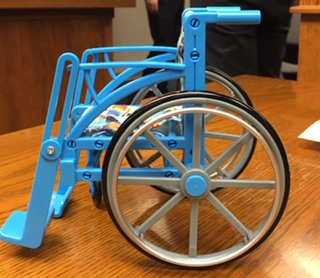 (BEDFORD) – During the North Lawrence Community School Board meeting, a few of the Visionary Committee members publicly spoke regarding the plans to consolidate area schools.

The Thursday school board meeting lasted more than 2.5 hours. Jada Rhrorer started off the meeting addressing concerns for those who have learning disabilities and came to advocate for those students.

Rhrorer is a teacher at Bedford Middle School and works with students who have significant learning disabilities. During her statement to the school board, she placed a wheel-chair on a desk in front of school board members to drive home the point that those with disabilities need to be considered in their decision to consolidate.

“I am here to express the concerns for the minority. I am here to give insight to those who have these learning disabilities. There are currently three self-contained classrooms that utilize their space. I am questioning what will happen to these students. I am just concerned about them being separated from their peers. They are seeing and learning things from the other students; is there going to be separation? And then what are they going to do with our classrooms during the consolidation process?” Rhrorer asked.

Lorie Hubbard, a member of the Visionary Committee and a school teacher, stated that she is in favor of the consolidation. Hubbard stated that what the school corporation is currently doing is not sustainable. She also stated that it is time to put the Lego clubs and Robotics into all of the schools. She noted that there needs to be more options for students such as STEM, STEAM, and poetry clubs.

“I support Plan 3,” Hubbard told the board.

Greg West from the Fayetteville area did not support the consolidation process and asked for school board members to resign.

“How many signatures will it take to get you to resign,” West asked.

The school board members did not respond to West’s comments on them resigning. West also talked during the meeting at the Performing Arts Center expressing his dissatisfaction.

Duane Brown, an employee of Stalker Elementary and a minister of Turning Point Nazarene Church, shared his support of Stalkers’ students and the use of the facilities at Stalker Elementary. Brown stated that his church has provided more than $60,000 in school supplies to students over the years.

Brown is a Visionary Committee member and has four children in the schools that will be closing under the consolidation plan. He said the time has come for something to be done.

“This is a difficult, challenging process, and with my four children affected by this, it is very personal to me,” Brown added.

Brian Pemberton, a Visionary Committee member who moved from Mitchell to the Shawswick area, stated that he moved to the school district to provide a better experience for his children after Mitchell was facing some social-economical problems.

“This consolidation is in the best interest of the kids,” he added. “We have been pumping the brakes on this for thirty-eight years.”

Tim Day, who is also a teacher for the North Lawrence Community School System, asked if the school board would seek a referendum for the voters to decide whether to consolidate the schools or not.

“Isn’t a referendum a true way of the public to have a say in this process?” Day asked.

Following the meeting Dr. Mungle told WBIW that a referendum must take place during the General Election. If this was to occur it would not be on the ballot until next November.

“This is not off the table,” Mungle stated.

During the school board meeting, none of the Visionary Committee members supported Plan 1 which is as follows:

More than 600 attended the meeting at the Performing Arts Center and 235 public responses have been received so far.

The Executive Meeting on December 5th has been changed to a public meeting in order for the public to speak to the School Board members. Kristen Collier was the only school board member not in attendance at Thursday’s meeting.