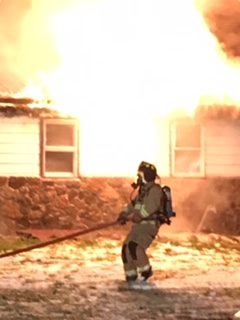 (BEDFORD) – Firefighters with Shawswick, Marion and Oolitic Fire Departments were dispatched to a residential fire in the 900 Block of Trinton Circle at 11:52 p.m. Wednesday night.

The occupants were not home when the fire started. Brandon Smith’s wife was having a baby at IU Bloomington Hospital when the fire broke out. Brandon briefly looked over the damage and his father told him to go back and be with his wife. Brandon has three children in addition to the one on the way.

Witnesses at the scene believed the fire began in the garage area of the residence.

Six engines responded from the three departments in addition to two support vehicles including an IU Health Ambulance and the Tabernacle of Praise Emergency Services Unit.

Shawswick Fire Chief Bobby Brown was not able to talk with us on possible cause at this time. Firefighters were still working on getting the fire under control at 1 a.m. and will be on the scene several more hours.