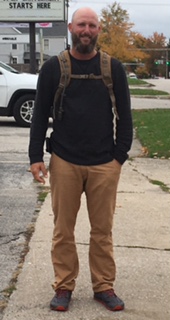 (BEDFORD) – Jeremy Miller, of Boise Idaho, is walking across the United States to raise awareness about veteran suicides and spread the word that there is help out there.

Miller started his travels in Crescent City, California walking the 101 Freeway and made his way to US 50 at Kansas City, Missouri. He will be in Bedford for the next couple of days due to strong storms being forecast. His final destination will be Arlington National Cemetery in Washington D.C. He hopes to arrive there on December 14th.

During his first 2000 miles he camped out in a tent, however, several VFWs and American Legion Posts have put him up in motel rooms so he does not have to camp outside.

Jeremy Miller served in the military from 2007 until 2015 and was Iraq in 2011 as a Combat Engineer who dismantled Improvised Explosive Devices. His group didn’t lose anyone in the war, however, they have lost 4 soldiers due to suicide in the last three years. Many of them are dealing with Post Traumatic Disorder.

Miller is also dealing with both PTSD and depression. He was arrested for driving under the influence and his life crumbled causing him to lose his job.

“I have been walking so people can understand the issues surrounding military suicide,” Miller said. “I am letting fellow veterans know they can be vulnerable, no matter what you are going through you can find happiness. My happiness is nature, and it has allowed me to find my happy place and decompress from the depression and PTSD I was suffering from.”

Miller tried to take his own life six months ago. Using alcohol and medication to cope, but has since thrown out his medication and started on this quest.

“The communities have been supportive, especially here in Bedford,” he added.

Many have donated money so he can complete his journey and any money that is left over will go to the non-profit organization he is starting.

You can donate on his Facebook page called “Walk Across America” which has a link to a Gofundme account.

“This by far has saved my life,” Miller added. “Depression can’t stop me. I must keep on going.”

A study published in the Cleveland Clinic Journal of Medicine found that Combat veterans are not only more likely to have suicidal ideation – often associated with post-traumatic stress disorder and depression – but more likely to act on a suicidal plan.