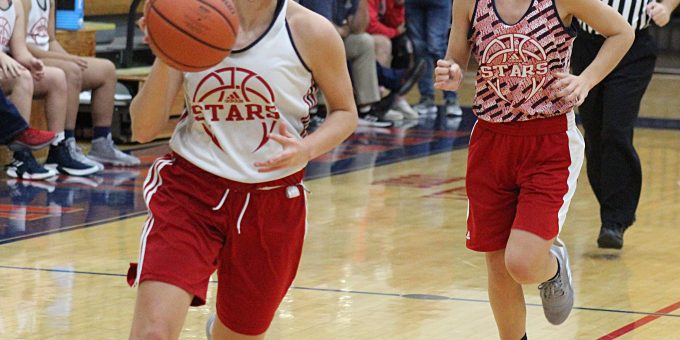 (BEDFORD) – Old habits, like a cockroach, need to be pounded on, making sure of a grisly death. Just when you think the demise is final, they’ll wiggle out without warning.

Bedford North Lawrence coach Jeff Allen had promised to unleash this 2019-20 team, to run relentlessly, press ferociously, attack without mercy. But it’s an intrasquad scrimmage, getting a little frazzled, and his first instinct is control. “Pull it out,” he ordered, that disciplinarian in him squirming out when play got a bit ragged.

So here’s what we learned from this annual exercise of a brief glimpse into the newest edition of BNL basketball: these Stars have one gear right now, and it’s not slow. There will be a time to throttle back later, perhaps.

BNL unveiled its change-of-pace style on Tuesday night, conducting two quarters of varsity action. The White team ‘won’ the half 23-17, although that margin seemed larger as Irye Gomez sparked her unit with 14 points. Madison Webb had 11 points for the Red.

While BNL does not have a Miss Basketball on the roster anymore, it has an abundance of quality basketball players, swarming guards, a post presence, and a snarl.

Gomez hit four treys, and freshman Karsyn Norman (7 points) had another. They played fearlessly, aggressively, and intelligently. So when the Stars get all their pieces in place, functioning as expected, they’re going to be fun to watch. Maybe not fun to dribble against.

Call the scrimmage a success, from multiple viewpoints.

“It’s hard to look good in an intrasquad scrimmage,” Allen said. “The one thing I told the kids, and I thought they did well, was I asked them to play as hard as they could. And execute, take care of the basketball. For the most part, they did that.

“I’d rather have it that way with those bunch, where I have to pull them back. We want to be disciplined, but we want to press the attack.”

Zip, zip, zip. Gomez started with a 3-pointer, Norman converted a Gracie Crulo-Rood steal into a basket, Gomez scored in transition, and Norman turned a scramble play into one of those pull-back-nevermind shots. The White was up 10-3 and on its way.

Norman added another breakaway off a Peyton Sweet pass, and then Gomez got hot with three straight bombs, two from the deep corner. If that’s going to be part of a consistent repertoire, she will be dangerous.

“It just depends if I’m on or off that night,” she said.

“I hope she shoots the ball like that this year,” Allen said. “It’s such a different game when you make shots. Your energy level is up and things come easier. She had it going well. She made a lot of great reads and great plays.”

BNL had other notable plays in the compressed time frame. Webb, of course, was a force inside. Carlee Kern had a rebound basket and an 8-footer in the lane.

“It’s tough to run stuff when everyone knows what’s coming,” Allen said. “But we have a lot of options this year, these kids like playing with each other, they play extremely hard. So the future is bright. I’m excited about this team.”

The final factor of note was unselfishness. The Stars were fast in transition, looking ahead for open teammates, and willing to give up the ball.

“That’s part of our chemistry,” Gomez said. “One strength we have is we’re very unselfish. It really just helps us all.”

So what’s next? BNL will now face unfamiliar opponents in the IHSAA controlled scrimmage at Heritage Christian on Saturday. That will give another glimpse into the true offensive options, into whether BNL can rebound against similar athletes, whether the press will lead to scoring.

“We feel like that’s a strong suit for us, especially with a couple of big kids back there when we do get beat,” Allen said of the full-court pressure. “You’re going to run into one of them. That gives us an edge. We can pressure and have a rim protector. We can go to our bench, probably more than I ever have, and keep pressure on people.”

This week of glorified practice sessions is leading up to the season opener at Mooresville on Nov. 8.