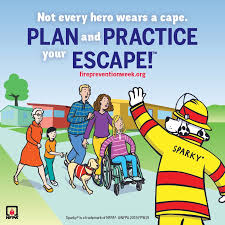 (BLOOMINGTON) – During this week’s observance of Fire Prevention Week, the City of Bloomington Fire Department (BFD) is teaming up with the National Fire Protection Association® (NFPA®) – the official sponsor of Fire Prevention Week for more than 90 years – to promote this year’s campaign, “Not Every Hero Wears a Cape. Plan and Practice Your Escape!”

The campaign works to educate everyone about the role that escape planning and practice play in a safe outcome, considering that after the smoke alarm sounds, there may be as little as one to two minutes to escape safely.

As part of the local observance of Fire Prevention Week, the BFD will be in attendance at the Bloomington Community Farmers’ Market this Saturday, October 12 from 10:30 a.m. to noon.

Fire chiefs and a squad of firefighters will share fire prevention information, teach hands-only CPR, offer tours of the BFD’s new aerial apparatus, and give two randomly selected visitors the opportunity to see the city from the top of the 100-foot aerial ladder.

Over the last three years, upgrades to training, equipment, technology, and apparatus; the use of performance standards; and a renewed focus on prevention activities have led to seven civilian saves, reduced average response times by nearly four minutes, and improved the City’s Insurance Service Office (ISO) rating from a 3/3x to a 2/2x.   Having worked toward the passage of the Public Safety Local Income Tax (PSLIT) in January 2017, Mayor John Hamilton has prioritized investment in public safety, including the replacement of an aged fleet of fire apparatus, all-new self-contained breathing apparatus (SCBA), annual physicals for firefighters, and the transition to a quartermaster system for firefighter protective gear.

“The difference between life and death in most emergencies comes down to minutes,” said Bloomington Fire Chief Jason Moore.  “Our well trained and equipped firefighters are getting to emergencies faster than ever before; however, we still need everyone to do their part to enhance their chances for survival.  Through campaigns like ‘Get out and Stay Out,’ ‘Close Before You Doze,’ and ‘Not Every Hero Wears a Cape,’ fire departments around the nation are working with community members to increase the chances of a good outcome.”

National figures demonstrate that home fires continue to pose a significant threat to safety.  NFPA statistics show that in 2017 U.S. fire departments responded to 357,000 home structure fires. These fires caused 2,630 fire deaths and 10,600 fire injuries. Across the nation, an average of seven people died in a fire in a home per day from 2012 to 2016.

While this year’s Fire Prevention Week messaging focuses on improving safety outcomes in home fires, it’s important to be prepared for a fire emergency in virtually any location, according to Prevention Officer Tom Figolah.  “Situational awareness is a skill people need to use wherever they go,” Figolah said. “No matter where you are, look for available exits. If the alarm system sounds, take it seriously and exit the building immediately.”