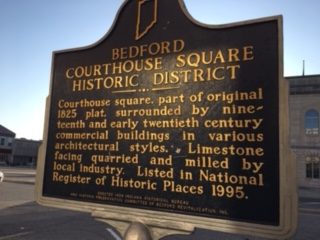 (BEDFORD) – The Downtown Bedford Historical Walking Tour was held Tuesday evening, but there are still opportunities to learn about Bedford’s downtown history. Tours will be held on Thursday, October 10th at 5:30 p.m. and on Friday, October 11th at Noon and 5:30 p.m. as part of Bedford Derby Days.

Those wanting to take the guided architectural tour should meet in front of the Lawrence County Museum. The tour takes approximately an hour. A handout with historical photos and information will be provided.

To take the tour RSVP to Teena Lingman at 812-849-1090 so there will be enough handouts. There is no cost for the tour however donations will be accepted for improvements of the downtown area.

Bedford is known as the “Limestone Capital of the World.” The Indiana Limestone industry started in Bedford early in the 1800s. Since that time the popularity of limestone has grown and many of the country’s famous buildings have been constructed with Bedford limestone.

Some of those structures include the Empire State Building in New York; Tribune Tower in Chicago; the Pentagon, and the National Cathedral, in Washington D.C.; the Biltmore Estate, and thirty-five state capitol buildings.

The tour begins on the Northwest corner of the square at Stonegate Arts Center and travels east to the former location of the Greystone Hotel.

The tour allows those to reflect and share how things have changed over the years around the Historic Bedford Square District.

Fires destroyed some of the original buildings throughout the years, and new buildings have taken their place.

Lingman tells stories of how former Bedford Mayor John Williams as a child loved riding the elevator inside Stone City Bank until he got ran off by the Bank President.

Teena Lingman, who was the guide for Tuesday’s tour, has also shared stories of a few ghosts haunting the downtown buildings.