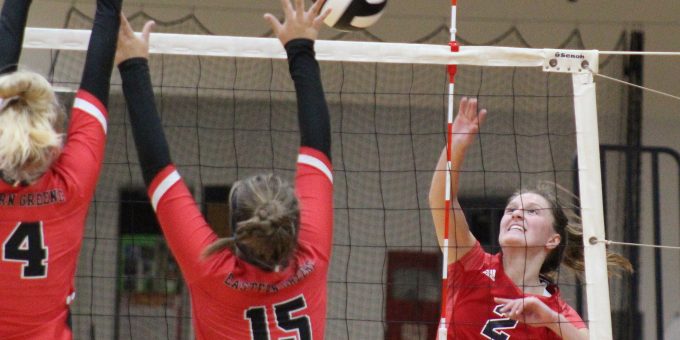 (BEDFORD) – Bedford North Lawrence acted like it had done this before. And recently, it has. Isn’t winning wonderful?

“It feels like we’re on a high right now,” junior Haley Deckard said. “We hit the bottom, but now there’s nowhere to go but up. It was very needed. Winning boosts our morale.”

Some moments were amazing, like that 17-2 opening burst, fueled by 11 straight service points by Myla Bergman, or the back-to-back-to-back exquisite points from Carlee Kern (a block for a point), Brynlea Bennett (a tremendous stab save) and Kern again (another block) for the final three points of the second set.

Some were frustrating, like the fact Eastern (4-19) cut into that 17-2 deficit in the first, like the fact Eastern erased BNL’s 18-11 advantage in the third to stay alive. Bottom line? BNL has come off the bottom. The fourth set lacked drama as BNL raced to a 10-4 lead and cruised from there, finally finishing with a Deckard kill.

“We won, the kids are doing well, we’re progressing,” BNL coach Jordan Robbins said. “We’re glad to have another win. Eastern wasn’t a team that was going to roll over.”

The Thunderbirds were defensive wizards, making improbable saves when BNL connected for what looked like put-away points. Indy Workman had an incredible number of digs (34), and freshman Kendall Moffitt had a headache serve (4 aces). But Eastern lacked net firepower, and that’s where BNL took advantage.

Kern had 10 kills, part of her all-around game with 23 digs and 9 service points. “When we can get her a good set, and she has confidence in herself, it’s tough to defend that” Robbins said.

The Stars will visit Columbus North on Tuesday.